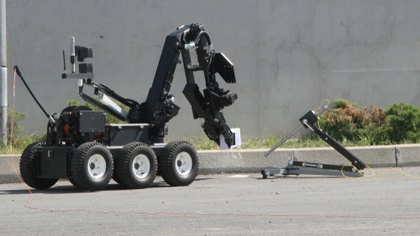 On Tuesday afternoon, June 15th, an Army bomb disposal unit was called out to Nottingham Street, Ballybough, Dublin 3 when Gardaí were notified of the discovery of a suspicious item at a property in the area.

The bomb disposal team arrived at the scene at approximately 5pm and immediately sealed off the area.

The suspicious item was identified as a World War Two era artillery shell. The shell was neutralised by the Army, who spent two hours at the scene before removing the shell for disposal elsewhere.

The shell was discovered at around 4pm by a construction worker who dug up the device in the back garden of the home of local resident Ben Lavelle. Speaking to Dublin Live, Lavelle described the device as "about eight inches long, metal and covered in clay."

Speaking about the operation, a spokesperson for the Defence Forces said "On arrival a cordon was established and maintained for the duration of the operation. A historical World War 2 era artillery shell was identified, made safe and removed for disposal elsewhere."

They went on to advise the public that should they encounter any such suspicious items or hazardous substances they should "maintain a safe distance and inform An Garda Síochána."