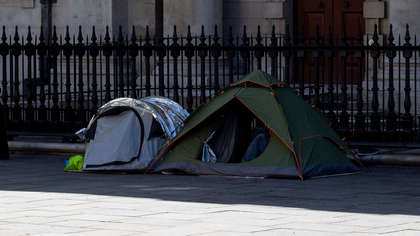 Owen Keegan, Chief Executive of Dublin City Council, has drawn criticism for his comments regarding homeless people living in tents in the city.

Keegan said the tents add to the perception that Dublin is an unsafe city. He believes homeless people shouldn't be allowed to sleep in tents while hostel beds are available.

"I'll get into trouble for saying this, but we don't think people should be allowed to sleep in tents when there is an abundance of supervised accommodation in hostels," he said in a radio interview on Monday.

"We've had up to a hundred, a hundred and fifty beds available every night for homeless people," Keegan claimed. "And we would have thought that it's not unreasonable that in those situations if you're homeless that you'd go into a professionally managed hostel. But there's a massive pressure to allow people to just camp on the street and that adds to that perception of an edginess about the city."

"We remove tents, it's something we do," Keegan said. "It's not very popular but we do it because it's appropriate. There's a whole industry out there about sustaining what we believe is a very unsafe and inferior form of accommodation for homeless people."

"We need to collectively challenge the system, we need to collectively help people," he said. "It's not good enough just to shame people who are living in tents. We must address the reasons they're in those tents and help them find permanent homes, a safe place that they can call a home."