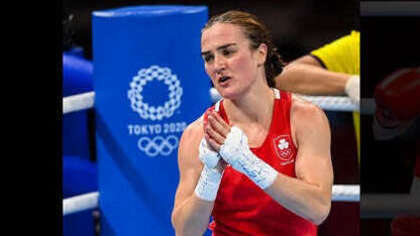 A Dublin councillor has called for gold-winning Olympian Kellie Harrington to be given the freedom of the city.

Calls have already been issued for the boxer to be awarded Dublin's highest honour.

"Kellie has put the North Inner City, Dublin and Ireland on the world stage in the most positive way possible," said independent councillor and former Lord Mayor of Dublin Nial Ring. "The Freedom of her native city would be a fitting recognition of her achievements."

While the city is celebrating Harrington's victory, Dublin City Council has ruled out a formal civic reception on her return to the country. Harrington is expected to arrive in Dublin on Tuesday.

In a statement, the council said it was "currently reviewing all contingencies in consultation with other relevant parties to ensure that Kellie, her family and the local community can be supported to celebrate her achievement in a Covid-safe manner."

The council acknowledged that Harrington's family and friends were "understandably keen for the city to mark her homecoming" and congratulated the boxer on her "wonderful achievement in winning the gold medal at the Olympics."

A further announcement is expected from the council regarding plans for Harrington's homecoming.