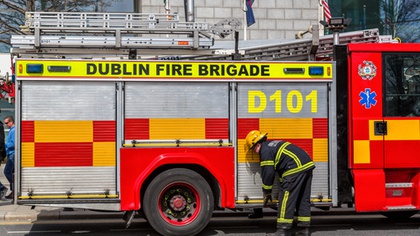 At approximately 8.35pm, Dublin Fire Brigade were alerted to 999 calls regarding the fire. Firefighters were dispatched to the scene with a water tanker and four pump appliances.

The Fire Brigade battled the blaze throughout the night, with the last embers extinguished at approximately 7.30am on Wednesday morning.

In a statement, Dublin City Council said the overnight rain had helped the firefighters bring the fire under control.

No injuries or property damage have been recorded in relation to the fire.

Along with the Howth Head blaze, Dublin Fire Brigade crews responded to fires at Kilbarrack and St Anne’s Park on Tuesday evening.

In their statement, DCC asked the public to be cautious of creating wildfires. "To avoid future fires we ask the public to only barbecue in designated areas, do not light camp fires, discard of smoking material in a responsible way and report any suspicious or anti-social behaviour to An Garda Síochána immediately. If you come across a wildfire, make sure you retreat to a safe position and ring 112/999 at the first opportunity. The earlier we are informed of the fire the earlier we can start firefighting and limit the spread."