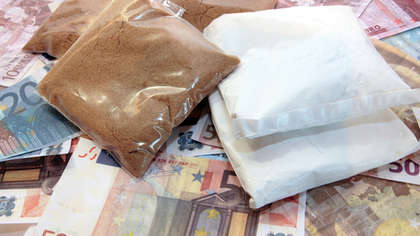 Raids in Dublin and Galway have led to the arrest of four men as large quantities of drugs and cash were uncovered.

Two men were arrested following a seizure of almost €180,000 worth of drugs and cash in Tallaght.

As part of Operation Tara, a house at Brookview Drive was searched by gardaí on Tuesday afternoon. €69,930 in cash was seized at the address.

A second search on Tuesday evening at a house in New Seskin Court led to the discovery of cocaine and MDMA worth a combined €108,687.

Two men were arrested, one in his 20s and the other in his 30s. The latter has since been charged while the younger man has been released without charge.

A file is being prepared for the Director of Public Prosecutions.

Overnight Operation Tara also carried out a number of searches in Galway.

Two men in their late teens were arrested. They are being held at North Western Regional Headquarters Galway under the provisions of Sections 2 of the Criminal Justice (Drug Trafficking) Act 1996.