Fresh Searches Carried Out in US for Missing Dubliner 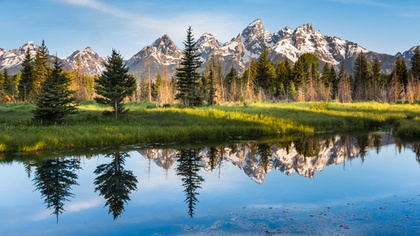 New searches have been conducted following fresh information in the case of a Dublin man who went missing in the US.

27-year-old Dubliner Cian McLaughlin failed to turn up at his place of employment on June 10th and was reported missing on June 12th. He was last seen on June 8th in Grand Teton National Park in the state of Wyoming. On June 13th his car was found at the Lupine Meadows Trailhead.

The 300,000 acre park has been combed by search parties but searches had been scaled back in recent days. More than 70 park staff and 45 helicopter searches have been involved. Over 140 people have been questioned regarding McLaughlin's disappearance.

Following information provided by a resident of Jackson, Wyoming, fresh searches have now been undertaken. A witness claims to have encountered McLaughlin heading south towards Taggart Lake on June 8th, when the two engaged in conversation. McLaughlin is said to have told the witness he was from Ireland, and was described as wearing round glasses, a white shirt and shorts.

Search teams are now focussing their efforts on the areas of Taggart Lake and Bradley Lake.

In their most recent statement, the National Park Services said "New clues will be investigated as they come forward. Park staff will continue to patrol the backcountry and search for signs of McLaughlin’s whereabouts."

A gofundme campaign to assist McLaughlin's family has raised over $46,000 to date.