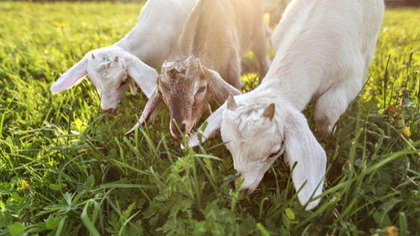 A herd of goats has been deployed in Howth in hopes that they can solve the problem of wildfires that has dogged the area in recent summers.

The idea is that the 25 Old Irish Goats, which have been relocated from Mayo, will feed on the gorse, thus reducing the chances of it catching fire.

A goat herder, Melissa Jeuken, has been assigned the task of supervising the animals in their new home.

"I'm really looking forward to it," she said. "The role is about settling in with the herd and then taking them out on the hill, working as one to tackle the grazing issue."

Jeuken highlighted the unique role the goats can play in stemming fires.

"The goats are good at scrub control," she said. "They love gorse and will graze on it day in, day out, if they can. So it's a natural way of dealing with the problem."

The land in Howth has become an increasing wildfire risk since the 1940s, when livestock last grazed in the area. Since then gorse has grown and expanded, leading to the fires that have kept Dublin Fire Brigade busy in recent weeks.

65 acres of Howth land is estimated to have been burnt in this summer's wildfires.

"We have been looking at this project for several years so it's great to see we can finally start dealing with the landscape issues here in Howth," he said.