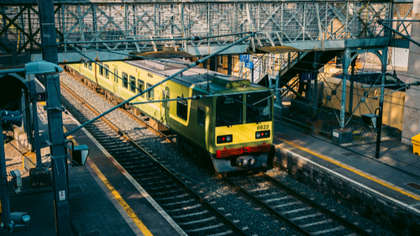 Irish Rail has launched an investigation following a report of a group of young males threatening to rape a female commuter on the DART.

The incident occurred on Wednesday evening and was witnessed by Fine Gael TD Alan Farrell.

"I don’t think I’ve ever felt compelled to tweet about such things, but from my journey home tonight on the DART, we have a very long way to go to ensure toxic masculinity is eradicated from our society," Farrell wrote on his Twitter account. "Chants of 'let’s rape her' were heard amongst lads, after lone women existed (sic) the train, before our final destination. I even checked with fellow passengers if I had heard wrong."

Farrell said he asked other passengers if they had heard the remarks and was criticised for highlighting the incident.

He confronted the group of men at Malahide and said some acknowledged their wrongdoing while others mocked his "politics."

Irish Rail has isolated CCTV footage of the incident and an investigation is underway. They are confident those responsible will be identified.

"An investigation is underway obviously to assist the gardaí in identifying those that were involved," a spokesperson for Irish Rail said. "Nobody onboard should have to hear that, particularly our women that are travelling with us should not have to hear disgusting, disgraceful language like that."

Calls have been made for dedicated security on the DART following a number of incidents of anti-social behaviour in recent months.

"With a situation like that you need more visibility and more monitoring of what is happening," said Mary Crilly, director of the Cork Sexual Violence Centre. "People are afraid to speak out. People [who witness it] are afraid to get involved in case they are beaten up. Which I totally understand."