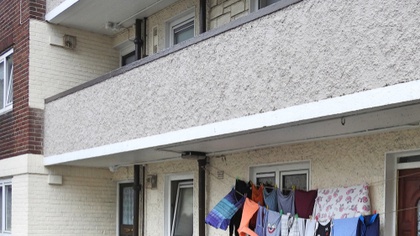 Residents of Dublin's Oliver Bond flat complex have appealed to Dublin City Council to fast-track plans for a regeneration of the area.

Home to approximately 1,200 people in 397 units, Oliver Bond House has been plagued by a variety of issues since its construction in 1936. 80% of residents have reported issues with mould and damp, with a third of residents reporting sewage and pest problems, including the presence of rats.

Residents are unhappy with Dublin City Council's announcement that it will take 15 years to complete regeneration of the area.

Cullen says residents of the complex are "physically and mentally sick of waiting" for the Council to begin the regeneration, and she accused the Council of brushing residents' concerns "under the carpet too many times."

Oliver Bond resident Lynette Lyons said "We are living with damp and mould that we have to wipe down weekly. We can’t keep clothes in our wardrobes. We have to wipe down our children’s schoolbags. Most of the windows are ill-fitting, old and draughty. It’s impossible to keep the flats warm."

Faced with a potential 15-year wait for regeneration to be completed, Lyons said "An entire generation will be forced to live in dire, unsafe and unhealthy conditions in the meantime. Many older residents will pass away in these conditions."