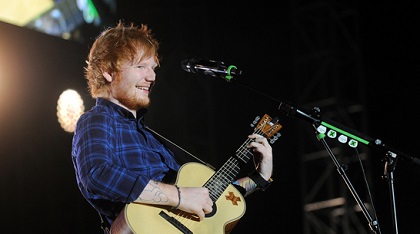 Ed Sheeran looks set to score his 10th Number One single, following the release of his latest track Bad Habits. It is the first track released by the singer without a collaborator since 2017.

According to the Official Charts Company, "Bad Habits" reached 1.5 million streams within 48 hours of its release last Friday (25 June). You can check out the music video below.

In the same day that Sheeran released "Bad Habits", the 30 year old debuted the song during TikTok's UEFA Euro 2020 Show at Portman Road, the home ground of the football team Sheeran supports, Ipswich Town.  Sheeran also performed "Castle On The Hill" and "The A Team" during this performance.

Loved playing for you tonight. Here's a clip in case you missed it. Tune in again tomorrow at 10am BST / 7pm AEST x #EdTikTokLIVE @tiktok

The track will also feature on Sheeran's upcoming studio album. A release date for that has yet to be confirmed.

Ed Sheeran had previously taken a break from music after he and his wife Cherry Seaborn welcomed their baby daughter Lyra Antartica Seaborn Sheeran last Summer.

It also looks like Olivia Rodrigo's "Good 4 U" looks set to drop down to second in the charts, having spent 5 weeks at the summit, while The Weeknd's "Save Your Tears" lies at number 3.

"Heartbreak Anthem" by Galantis, Little Mix and David Guetta occupies 4th position, while "I Wanna Be Your Slave" from Eurovision winners Maneskin lies in 5th.

The final chart places are announced every Friday.