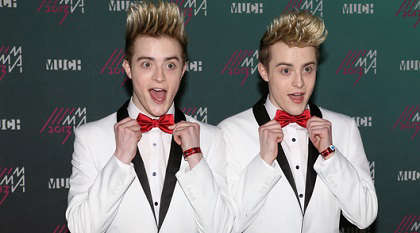 Jedward have issued the following message, "just because we wear sequins doesn’t mean we don’t know what we’re talking about", before adding "We slayed Jim Corr."

The twins, whose real names are John and Edward Grimes turn 30 in October. The brothers have won a new following, having used social media to highlight injustices over the last few months, including Black Lives Matter, trans rights and the LGBTQ community.

“We’re so happy that people have been connecting with us", one half of the Jedward double act Edward said. "There’s been so much crazy stuff that happened in this pandemic, we brought a lot of happiness to people".

"We were fighting all the fights and we were saying what we believed in and a lot of people weren’t expecting it...", he continued.

“We won all our fights, we slayed Jim Corr, we slayed Piers Morgan, we slayed other people as well, it was cool", he added.

"We went against those relics and we were coming through as the underdog, and all those punk rock alternative bands that usually stand for all these things, they left down all these people and  me and John rose to the occasion”.

Louis Walsh wants to make another girlband like Girls Aloud who he told had to lose weight! Don't get involved with Toxic Management! pic.twitter.com/3OPzJmHrsi

Edward's twin John said that nobody expected them to rise up and take a stand.

Back in April, former Good Morning Britain presenter Piers Morgan blocked Jedward from his Twitter account, after the pair blasted Simon Cowell for considering rehiring him for Britain's Got Talent.

"Simon is considering Piers Morgan for judge on BGT after the s*** he said about Little Mix over this iconic photo! Have some respect for the girls you judgemental misogynistic farts!", they wrote.

They added, "Simon and BGT don’t be back stabbers hiring Piers Morgan. You would have no reputation without Little Mix and previous acts! Still friends with a person who degraded young women in a hate campaign against them? Years may go by but fans don’t forget".

Morgan responded by blocking them from his Twitter account, which led to Jedward calling him a "coward".

Confirmation @PiersMorgan is threatened and a coward! You can’t block free speech! No Justice No Peace 🙌🏼 pic.twitter.com/pVRXn5V5qO

On this episode, Edward had this to say, “I think we’re living in a different time with people like Piers Morgan who have this status, people are seeing through the bull**** and they’re not just taking what’s been said to them on TV".

The twins also added that they have taken the time to learn about what they are discussing online, and added that anybody can do the same.

"I think the facts are the facts and sometimes people who’ve just read a Wikipedia page on the topic and think they can start saying all these words and they’re above you because they’re able to recite what they’re learned, more like a sponge", John said.

"But I feel like we’ve actually lived life and we’ve come from where we come from and you can always take a new path, a new direction", he added.

“We live in Dublin, we’re not living in some la-la-land where we don’t know what’s happening", Edward said.

“And we’re not in a copy and paste situation where we just share what someone else has said, we give our own unique take on it".

"We meet our fans, we know what they’re going through, we see what people are talking about, we see what’s happening. And we’re never on social media flexing, ‘oh look I got this new car, new watch’.

"What would they know?"

John also insisted that it is very important not to judge somebody simply by their appearance.

“Look I know we sound like we’re bigging ourselves up saying this and that, and it’s weird to talk about what we’re bringing to the table. We don’t really put that much thought into it. I know we are talking about it, it is a conversation and that’s great".

He continued, "But we’re thankful that people want to hear what we’ve got to say and appreciate what we have to say, and our opinions. It’s nice because I think a lot of people need to not prejudge people because I feel like we’ve been prejudged, ‘Those guys- what would they know?".

"Actually we know a lot. Just because we don’t look the part sometimes or we’re wearing glitter and sequins that we still have an opinion".

"We come from a place of ‘I put myself out there, yes I've done this and put myself up to be scrutinised and people have an opinion because I haven’t put myself in the most comfortable clothing, or looked like a straight-laced poetry student".

John put the key to their success down to "always being very reproachable". It is also this ability to be "reproachable" that has landed the twins two judging jobs.

The pair are judges on Virgin Media show "The Big Deal" and they are also ambassadors for the Cadbury Diary Milk Inventor company. This pits three new flavours against each other. These flavours are Fizzing Cherry, Banoffee Nut Crumble and No Frownie Brown.

“I know me and Edward are like next level, like Lady Gaga, Eurovision and sequins but we have always been down to have a conversation with people. We’ve never been like ‘we won’t talk to this person.’ We’ve always been very approachable", John explained.

Adding, "Just like Cadbury, we’re always inventing  ourselves and changing, they’re changing it up with their new bars, Cherry, Banoffee, No Frownie Brownie. We’re all about adding new layers, new flavours and it’s got the seal of approval from us so it must be the business".

Like many artists, Jedward also voiced their support for Britney Spears in her legal battle to end her conservatorship with her father Jamie.

Britney and us want her Dad in Jail @britneyspears #FreeBritney He’s held her prisoner for years and now it’s his turn 🙌🏻 pic.twitter.com/3IYNc5meZV