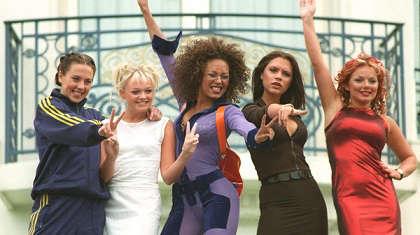 To mark 25 years since the release of their debut album, the Spice Girls will release a deluxe edition which includes previously unheard material, bonus tracks and b sides.

"Spice25" will be released on October 29. It will come as a 2 CD set inside a A5 hardback cover. An Apple exclusive remastered edition of the original album will also be included with a variety of cassette and vinyl versions using Dolby Atmos.

The original debut album had been released in 1996. It went on to become the biggest selling record of the decade, featuring tracks like "Say You'll Be There", "2 Become 1" and "Wannabe".

"Say You'll Be There"

Yesterday saw the band also share a version of "Say You'll Be There", with Judd Lander's harmonica replaced by a saxophonist solo.

Speaking on the anniversary, Geri Halliwell said, “From the first wannabe baby steps to conquering the whole world with a team of Spices, thank you doesn’t seem enough to all of you who have supported us, followed in our footsteps, walked in our great big shoes and who have shared our dreams".

“All I ever wanted was to be accepted and to make everyone around me – gay, straight, brown, black, shy or loud like me – to feel they can celebrate who they are and to be free to be themselves", Mel B said.

“All I hope – 25 years on – is that message has been heard loud and clear. It’s true that in the end love IS all you need so I thank everyone who has ever bought a Spice Girls record or stood in the rain to greet us or got dressed up in pink, in a tracksuit, a ginger wig, a leopard print catsuit or put on Vic’s iconic pout!".

SURPRISE!! 🎉 To mark the 25th Anniversary of our debut album ‘Spice’ we are releasing a limited edition collection of vinyl and cassettes PLUS a 2CD deluxe featuring some previously unreleased tracks and demos. You can pre-order now 💕 #SPICE25 - https://t.co/0puSjzmONB pic.twitter.com/qJR70ClHyx