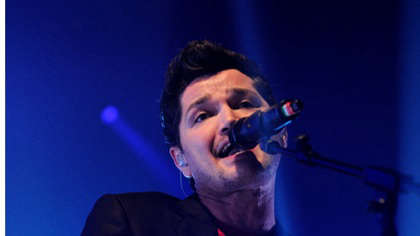 This is celebrating the band's release of their greatest hits album "Tales From The Script". The album will be released on October 1.

This is the Script's first set of live shows in over two years, with the band hitting London's O2 along with Dublin's 3Arena on June 14 & 15.

Tickets will go on sale from September 3 at 9-30am at €47.55. The Irish band will also be joined by singer Ella Henderson for their live shows.

"Tales From The Script"

"Tales From The Script" celebrates the Script who have had five UK Number 1 Albums, six billion streams, along with over two million ticketsales. It will feature all of the biggest hits and favourite tracks from their six albums so far.

It will include number one hits such as "The Man Who Can't Be Moved", "Superheroes", "Hall Of Fame", and "For The First Time". The album also features snippets from live shows of the band performing "Breakeven", "Rain" and "We Cry".

"The ‘Tales From The Script’ album is a springboard to our next chapter, but it’s also our story so far", says the Script's Danny O'Donoghue. “We’re so excited to be taking it on the road. I know I’m gonna lose it on stage, night after night".

Bandmate Glen Power added,  “We’re taking all the best songs and playing them all together in one place. It will turn it into a celebration that we’ve survived and we’ve all got through to this moment together".

"Tales From The Script" will be released on CD, digital, and cassette formats.

The Script Greatest Hits 2022 Tour with support from @EllaHenderson!

Pre-order our Tales From The Script Greatest Hits album before 3pm on Tue Aug 31st to gain access to the exclusive tour pre-sale at 9:30am on Wed Sep 1st. https://t.co/DKQj6lR7NE#TalesFromTheScript pic.twitter.com/HTOwLaSUtq

The album will also feature the band's new track "I Want It All". The track according to Mark Sheehan, “delivers all the ingredients everyone knows and loves”.

It will also feature acoustic versions of "Never Seen Anything Quite Like You".

You can pre order the album from the band's official store from 3pm on August 31.