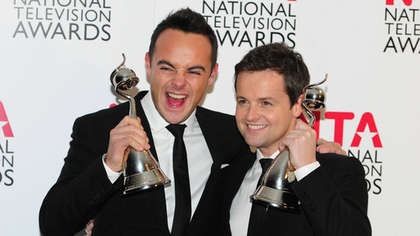 "This one means the most," Ant McPartlin said in his acceptance speech. "Twenty years. This is really, really special. You have no idea how special this is."

"When you get to 20, you can't help but stop and look back at the first time we won in 2001, and so much has changed in both our lives since then but one thing that hasn't changed is how unbelievably grateful we are that you take time year after year to watch both of us," added Declan Donnelly.

The duo also won the Entertainment category for their reality show I'm A Celebrity... Get Me Out Of Here.

Police corruption thriller Line of Duty picked up two awards for the Drama category and a Special Recognition award.

Collecting the latter award, star Adrian Dunbar teased fans by saying, "Who knows, we might be back."

The Quiz Show category was won by Beat the Chasers, a spinoff from the popular game show The Chase.

After Life, the Netflix show written by and starring Ricky Gervais, beat Sex Education, The Vicar of Dibley and Friday Night Dinner to scoop the Comedy award.

Gervais was in typical sarcastic form when accepting his award.

"The amazing crew and cast, and the people at home who voted for it. Thank you so much. You are the reason I do this. The money is... You are the second... I do it for the money and thank you…" he kidded.

"Thank you so much for voting," Garraway said on accepting the gong. "I wonder if the reason why you did is because our story is your story. I think we have all been touched by the pandemic, whether it is livelihoods, mental health - all the other extraordinary documentaries that have been highlighted and nominated tonight, they have also been affected by the pandemic and I just want to say to all the Darceys and Billys and Dereks and Derek's family - whatever you are going through and however you are affected, you are not forgotten."

Actress Mollie Gallagher won for her performance in Coronation Street. She paid tribute to Sophie Lancaster, the murder victim whose story inspired a current plotline in the soap. Lancaster was killed by bullies who targeted her due to her "Goth" fashion style.

You can see the full list of winners below:

Entertainment: I'm a Celebrity, Get Me Out of Here

New Drama: It's a Sin