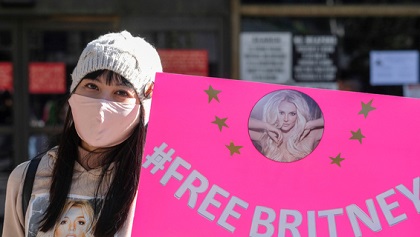 Justin Timberlake, along with a host of other household names including Mariah Carey have showed their support for Britney Spears following her emotional testimony she delivered in court yesterday regarding her conservatorship with her father Jamie Spears.

Yesterday, Spears addressed a Los Angeles Court in an open hearing yesterday. During this testimony, Spears called for her "abusive" conservatorship to come to an end which she has been under since 2008.

“I just want my life back. And it’s been 13 years. And it’s enough", she said in her testimony. “All I want is to own my money, for this to end, and for my boyfriend to be able to f*****g drive me in his car. And I would honestly like to sue my family".

"We should all be supporting Britney"

Following the news of Spears' testimony, several well known faces in the music industry joined fans in voicing their support for the pop star.

Justin Timberlake was Spear's partner from 1999 to 2002. Timberlake wrote on social media, "After what we saw today, we should all be supporting Britney at this time".

“Regardless of our past, good and bad, and no matter how long ago it was… what’s happening to her is just not right", he added. "No woman should ever be restricted from making decisions about her own body".

“No one should EVER be held against their will… or ever have to ask permission to access everything they’ve worked so hard for".

“Jess and I send our love, and our absolute support to Britney during this time", Timberlake added, speaking on behalf of his wife Jessica Biel.

Halsey also voiced her support for Britney, tweeting “Bless Britney and I hope with my whole heart she is awarded freedom from this abusive system,” they said. “She deserves it more than anything. I admire her courage speaking up for herself today".

Bless Britney and I hope with my whole heart she is awarded freedom from this abusive system. She deserves it more than anything. I admire her courage speaking up for herself today.

Additionally, fuck anyone who thinks they have the authority as an institution or individual to control a person’s reproductive health. #FreeBritney

Spear's testimony marks a significant development regarding her controversial conservatorship which was co-managed by her father Jamie Spears. This conservatorship sparked huge public interest following the premiere of the Netflix documentary, Framing Britney Spears, which aired in February.

Following this testimony, Jamie Spear's lawyer said that his client is “sorry to hear she’s suffering and in so much pain” and misses his daughter "very much".

His lawyer had previously said that fans "have it wrong" about the conservatorship and his client believes every decision he made was in her "best interests".

After Spears finished her testimony, Judge Brenda Penny said that Spears would still need to file formal paperwork with the court to end this conservatorship or make other significant changes.