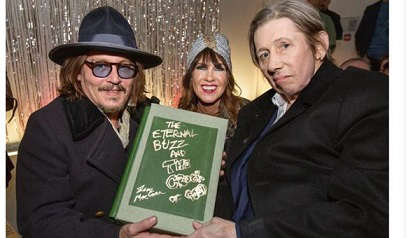 Victoria Mary Clarke has provided an update regarding the health of her husband Shane MacGowan after the music legend was admitted to hospital last week (Friday 2 December).

In a recent interview, Victoria Mary Clarke had stated that Shane MacGowan had been admitted to hospital, calling on fans to keep in the Pogues singer in their prayers, as well as urging them not "to get too worried".

Since then, Clarke has updated fans further. Thanking them for their support, she has stated that Shane was being "treated for an infection and the doctors are confident that he will be ok".

“I am just incredibly grateful to them and to all of you", she added.

I just wanted to thank everyone who has been sending good wishes for @ShaneMacGowan , he is being treated for an infection and the doctors are confident that he will be ok. I am just incredibly grateful to them and to all of you 💗💗💗💗💗💗

Pogues singer Shane MacGowan has sufferred with on and off again health issues over the years, having fractured his pelvis in 2015 following a fall. That same year also saw him undergo extensive teeth and titanium implants for oral and dentistry issues, following years of alcohol and subtance abuse.

The singer also released his latest book The Eternal Buzz and The Crock of Gold earlier this year, which covered 60 years of artwork from the singer, including drawings of Grace Jones, Bono and Kirsty McColl.