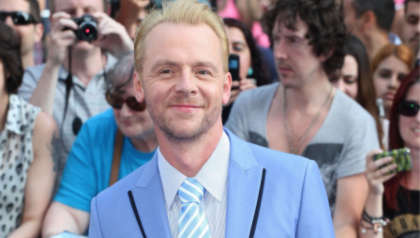 Backstage at Glastonbury 2022, Simon Pegg spoke about his prosperous social life, which includes a friendship with Coldplay's Chris Martin and even taking a trip to Disneyland with rapper Jay-Z.

Simon Pegg who has starred in Mission Impossible, Star Trek and Big Train, spoke about a previous appearance at the Worthy Farm Festival, where his daughter Tilly joined Coldplay on stage. So close is the pair's friendship, that Chris Martin is also Tilly's godfather.

“On her first Glastonbury she sang backing vocals with Coldplay,” said Pegg. “Chris Martin is an old, old friend and [my daughter] Tilly’s godfather", Pegg revealed. "He invited her up on stage with his kids and their friend to sing the backing vocals on ‘Up&Up’. I was an incredibly proud dad that day".

Pegg also revealed that he has been invited backstage to meet the rest of the Coldplay band on several occassions, through his friendship with Chris Martin.

“I have been able to go backstage a few times here with Coldplay through knowing Chris", he said. "But it is more fun to be out and enjoying the festival. You get a weird detached version of the festival [when you’re backstage]".

He continued, “Having said that, I’m not camping, I’m staying in a hotel nearby. I’m 52 and I shouldn’t have to sleep on a plastic sheet. That doesn’t happen until I’m 70! Even glamping I can’t do. I want room service and clean sheets every day".

During Coldplay's live performance, Pegg was spotted stage side with "all of his friends" Jayz, his wife and singer Beyoncé and actress Gwyneth Paltrow. Paltrow was of course married to Coldplay frontman Chris Martin.

Pegg did share details of a recent trip to the happiest place on earth with Jay-Z.

“I did go to Disneyland with Jay-Z recently", Pegg added. “I don’t know him that well but he’s friends with Chris [Martin] and we’ve met a couple of times. He’s a really sweet guy. He’s a dad too. We were all being told to go on the rollercoasters by our kids who are braver than we are".