Billy Connolly on His Parkinson's: "The Challenges of My Disease Are Getting Worse" 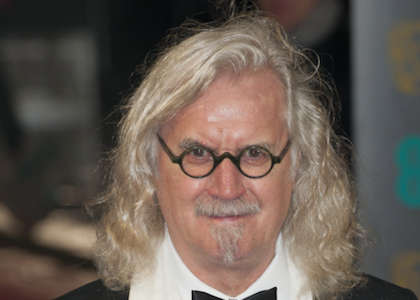 Billy Connolly has revealed that his battle with Parkinson's disease was the reason he was forced to retire from live stand-up comedy. While he says he disease is "getting worse" he is still enjoying filming television programmes.

When he was awarded a lifetime-achievement award at Edinburgh TV Festival, Connolly spoke on how he had learned to approach his illness and acting in a similar fashion:  “I hardly prepare. I turn up unprepared and everything’s a new challenge. The challenges lately have been medical. They’re getting worse. You’ll notice I’ve been holding my left hand – it’s starting to jump around. I have to weigh it up and see how bad it gets.”

In a previously recorded interview with his wife, the Guardian columnist Pamela Stephenson Connolly, he made light of his condition: “On the last tour I used to say to the audience, ‘Good evening, symptom spotters.’”

Connolly recently wrapped filming on a five-part documentary series for UK Gold titled Billy Connolly Does... that looked back on the 78-year-old's life and career. However, he reflected on his concerns about accepting a lifetime-achievement award: “I feel like I should be dead. These ‘lifetime’ things – I feel like they know something I don’t.”

He also recalled his popularity after appearing as a guest on Michael Parkinson's chatshow in 1975 and how strange it was to hear a working-class Scottish accent on British television at the time. He said: “It’s a thing the Scots have got about accents. You can be as popular as you like, but if you don’t have a Scottish accent when you’re doing it, it’s different. They loved the fact I went on with my Scottish accent and got famous. They took it personally and they all applauded and it was lovely.”

Despite his love for his home country, however, he admitted that he'd always struggled with one aspect of Scottish clothing: “It eats me alive, the kilt. My legs get purple. My willy gets purple.”