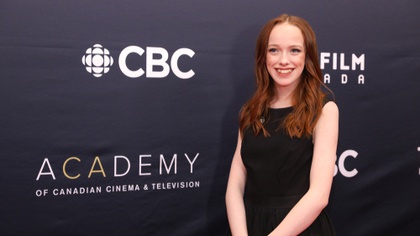 The Letterkenny native is no stranger to Netflix, having previously played the title role in the streaming giants' Anne with an E, an adaptation of author Lucy Maud Montgomery's popular series of Anne of Green Gables books, first published in 1908. The red-haired actress beat over 1,800 other teens that had auditioned for the role. McNulty was quick to win critical acclaim when the show premiered on Netflix, with The New York Times praising her "wonderfully ebullient and eminently likeable" performance. For Anne with an E - which was filmed in Canada, where McNulty's mother was born – McNulty was awarded the Canadian Screen Award for Best Television Actress and the ACTRA Award for Best Female Performance.

This summer McNulty can be seen in director Colum Eastwood's Irish thriller Black Medicine, where she will play a drug-addicted teen alongside Antonia Campbell-Hughes and Orla Brady.

In Stranger Things' fourth season, which is currently in production in Atlanta, McNulty will portray a character named Vickie, described by Netflix as "a cool, fast-talking band nerd who catches the eye of one of our beloved heroes."

Debuting in 2016, Stranger Things has become one of Netflix's most successful flagship shows. 40 million Netflix subscribers watched the show within the first four days of the release of the third season in July, 2019, and with the fourth season delayed due to COVID-19, anticipation among fans is at a fever pitch.

The show, created by the Duffer brothers (Matt and Ross), is a love letter to the TV shows and movies of the 1980s, and is heavily influenced by the films of Steven Spielberg and the writings of Stephen King. Set in the fictional American MidWest town of Hawkins, Indiana, the show follows a group of adolescents (not unlike those from the cult '80s kids' movie The Goonies), who uncover dark secrets in their otherwise mundane town. Some of its young stars have gone on to develop movie careers beyond the show, with Millie Bobby Brown recently playing the lead in the Netflix film Enola Holmes.

Netflix's viewing figures have been boosted over the last year, thanks in no small part to the pandemic creating an audience hungry for a steady stream of content. It currently boasts over 200 million subscribers, twice the number of its closest streaming service rival, Disney+, which launched in 2020. Last year, four out of five of the most watched shows in the US were streamed on Netflix.

McNulty isn't the only young Irish actress benefitting from Netflix's continuing rise. 28-year-old Dubliner Danielle Galligan is among the lead cast of fantasy series Shadow and Bone. Having made her TV debut in 2019 in Game of Thrones, Galligan is no stranger to fantasy. Based on Leigh Bardugo's bestselling series of Grishaverse novels, Shadow and Bone launched on Netflix earlier this year and claimed an instant fan-base, with over 55 million subscribers watching the series in its first 28 days. It was the number one Netflix show in several countries, including Ireland. The show has just been renewed for a second season, with Galligan set to reprise her role as supernatural being Nina.

Arguably the most talked about Netflix show to premiere over the last year was Bridgerton. Inspired by Julia Quinn's bestselling novels, the raunchy period drama follows the eight close-knit siblings of the Bridgerton family, a fixture of London's high society. Among the costumed cast is Galway actress Nicola Coughlan, who rose to fame as a member of the cast of hit Channel 4 sitcom Derry Girls. With its colourblind casting and steamy storylines, Bridgerton has generated a huge following, with a second season currently in production.