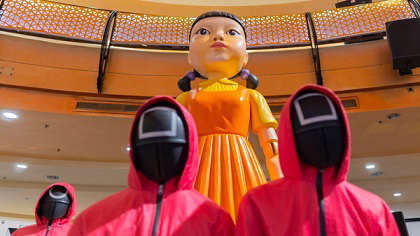 Squid Game has made history at the Screen Actors Guild awards, becoming the first foreign-language and first Korean TV series to receive a nomination.

Netflix’s hit K-drama series Squid Game has become the first-ever Korean series to receive nominations at the Screen Actors Guild (SAG) Awards. The final list of nominations has been released earlier this morning, ahead of the 28th edition of its annual awards ceremony.

In receiving the honourable nominations, Squid Game has officially made history for the industry in South Korean. It has become both the first South Korean series, as well as the first foreign-language programme, to ever receive nominations from the United States-based awards ceremony.

Speaking to Variety, Squid Game director Hwang Dong-hyuk said, “Since we released the show ‘Squid Game,’ we have experienced many surprising events. But today’s nomination for four categories with the SAG has to be one of the most surprising, and one of the happiest moments we’ve experienced.”

Dong-hyuk added that he is “especially honoured in that it’s not only one or two lead actors that were recognised.” However, he insisted his honour extends further as the entirety of the main and supporting cast, as well as the stunt team, have received monumental recognition.

Meanwhile, actor O Yeong-su, Player 001 in the hit series, became the first-ever South Korean to win a Golden Globe. The cast members of Squid Game have since congratulated the actor for his historic win at the 79th Golden Globe Awards.