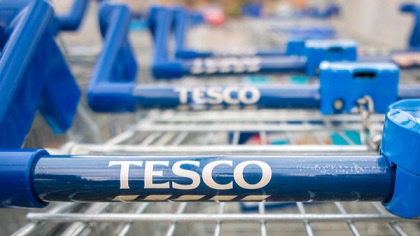 One Tesco store went above and beyond for a local customer and created the bumper-trolly for her four small children.

“Every little helps” may be Tesco’s slogan but one store has gone above and beyond for one grateful mother. The woman who mothers two sets of twins has praised the grocery store after staff made her a special trolly to carry her load.

Annie Burton, 32, found herself in a bit of bother whenever she visited her local Tesco with eight-month-old Henry and Eadie and two-year-old toddlers, William and Elizabeth.

After failing to safely hold her kids in the shopping trolly - two in the flip seats, two standing, staff in Filey, North Yorks spotted her struggling and went to lend a hand. However, the helpful staff went the extra mile for one of their customers and made her a bespoke shopping trolley for the four kids.

O2 account manager Annie, who lives on a farm with partner Philip Steel, 35, said: “I tried every combination, carrying two with the other two in the trolley or two babies in the seats and the toddlers stood inside.

“It wasn’t easy. Then a few weeks ago the store managers Carly Gavin and Richard Day spotted me and said they’d had an idea and they were going to get in touch with the trolley manufacturers to build a special one for me.

“I just laughed and thought no more about it. But last week when I went in, they said it had arrived and when I saw it, I was blown away! They said they’d keep it out the back just for me! From now on my life is going to be so much easier, just as long as the wheels don’t go wonky!”

Store manager Richard said: “We were so happy to be able to help Annie out with her shopping and we can’t wait to see her and the little ones in store again. We just hope there’s enough room left in the trolley for all the nappies!”