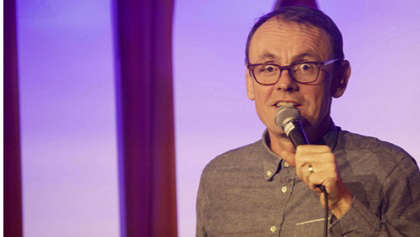 Irish comedians have been united in their grief for friend and colleague Sean Lock, who sadly passed away from cancer aged 58. Lock was best known for his work on the comedy shows 8 Out Of 10 Cats and 8 Out 10 Cats Does Countdown.

Lock began his career in 1993, starring alongside David Baddiel and Rob Newman for their TV show Newman and Baddiel In Pieces.

Lock also went on to win best live stand up at the British Comedy Awards in 2000.

In 2005, the comic was made captain on the Channel 4 show 8 Out Of 10 Cats, going on to appear in 18 series. He also appeared in Have I Got News For You and They Think Its All Over.

Always loved Sean playing The Person of Restricted Seriousness who’s in denial in N&B in Pieces. It still makes me laugh. Even today, through the sadness, it makes me laugh. pic.twitter.com/fnXlhg5l18

Comedians leading the tributes to Lock include Dara Ó' Brian.

"This is desperately sad news", the Mock The Week host tweeted. "Such a brilliantly funny man".

This is desperately sad news. Such a brilliantly funny man. https://t.co/SINgJqvkFI

Sean Lock, what a loss.

David O'Doherty who co-starred alongside Sean Lock on 8 Out Of 10 Cats Does Countdown also said, "Rest in peace Sean Lock. A true natural comedian who taught me so much x".

Rest in peace Sean Lock. A true natural comedian who taught me so much x

Jarlaith Regan who presents An Irishman Abroad wrote this.

The show's host Jimmy Carr added, "Brutal news about Sean Lock today. I loved him. I’m watching clips of him right now - laughing & crying. I’ll miss him so much".

While another co-star from the show Jon Richardson also paid an emotional tribute to the late comic.

Brutal news about Sean Lock today.
I loved him. I’m watching clips of him right now - laughing & crying. I’ll miss him so much.

I can’t find the words but this says it - Warren Zevon - Keep Me In Your Heart https://t.co/MwsFsekqEQ via @YouTube

I idolised Sean as a comic long before I became a comedian myself and ten years working alongside him didn’t diminish that in the least. An incredible comic brain and a truly unique voice. pic.twitter.com/4ZH8HRQrIU

I’m devastated for his family today and sad for comedy that we have lost one of the very best.

Undisputed, undefeated, carrot in a box champion. I will miss him.

Let's remind ourselves just why Sean Lock was a much loved and very funny comedian.