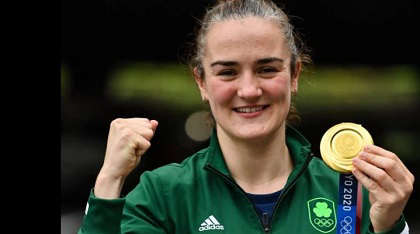 Kellie Harrington has said that she plans to get replicas for her gold medal made up, after revealing that the original has already been scratched.

"There's a bit of a scratch on it already. I don't know how it scratched", Harrington revealed. "I think you can get replica medals made so I might see if I can get a replica medal and bring that around with me".

Following her victory in Sunday's final over Brazil's Beatriz Ferreira, Harrington had admitted that she has not slept much since.

Kellie also admitted that she is unsure as to what to do with her gold medal.

"It's like we are all waiting for Santa Claus! They’re actually tracking Kellie’s plane home. So, it’s like Christmas Eve here for all of us. It really is powerful", he said.

'I have no tears left to cry' - Olympic champion Kellie Harrington arrived at Dublin Airport to an emotional reception.

The boxer said she is looking forward to going home for 'a cup of tea, a few biscuits and maybe a few donuts' | Live updates: https://t.co/QBdOEmYT7S pic.twitter.com/U3boxCjfv8

Kellie Harrington arrive back in Ireland with bronze medalist Aidan Walsh who was full of praise for the 31 year old Dubliner. He described her victory as "absolutely incredible".

“It was absolutely incredible to be able to witness that - an Olympic gold medalist is amazing", he said.

"She deserves every inch of it, she gives everything to the sport", he added.

“She's a top-class athlete and it showed the whole way through the Olympics".

'I feel extremely lucky to be standing here, the whole team deserve medals' - boxer Aidan Walsh was full of praise for his @TeamIreland teammates as he arrived back to Dublin Airport with an Olympic medal around his neck | Live updates: https://t.co/QBdOEmYT7S pic.twitter.com/KwsivFaAYL