Mission Impossible 7 To Feature Tom Cruise's "Most Dangerous Stunt" Yet 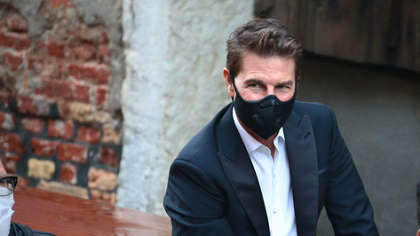 The role of Ethan Hunt has seen Tom Cruise pull several dangerous and wild stunts over the years. But this latest one appears to be his "most dangerous" yet!

This latest film which has been postponed several times since the pandemic began, sees Tom Cruise taking a motorbike ride down a ramp and off a giant Norwegian cliff and lets go in mid air before his prachute is released.

In the past, Cruise has scaled the 2,717-foot high Burj Khalifa skyscraper in Dubai, performed a skydive from almost five miles high. He has even hung off the side of a plane as it took off.

He also piloted a helicopter through narrow mountain ravines. But this stunt appears to top the lot!

A clip featuring Cruise talking to director Christopher McQuarrie about the stunt was shown at the CinemanCon gathering of movie theatre operators and Hollywood executives in Las Vegas.

Check out the trailer here.

"This is far and away the most dangerous thing I've attempted; we’ve been working on this for years", Cruise told Deadline Hollywood. "I wanted to do it since I was a little kid".

For this film, Cruise returns as the spy Ethan Hunt. It returns after a shoot which was disrupted with postponments due to Covid-19. Shooting has been taking place across the UK, Norway and Italy for more than a year.

Cruise also spoke about he trained for over the last year ahead of this stunt. This included 13,000 motor-bike jumps and 500 sky diving sessions.