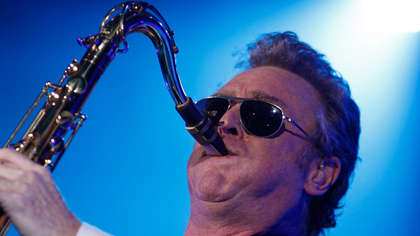 UB40 saxophonist Brian Travers has passed away following a battle with cancer.

Travers was a founding member of the pop-reggae outfit, formed in Birmingham in the late 1970s.

"It is with great sadness that we announce the passing of our comrade, brother, founding UB40 member and musical legend, Brian David Travers," read a statement posted on the band's social media. "Brian passed away yesterday evening with his family by his side, after a long and heroic battle with cancer. Our thoughts are with Brian’s wife Lesley, his daughter Lisa and son Jamie. We are all devastated by this news and ask that you respect the family’s need for privacy at this time."

It is with great sadness that we announce the passing of our comrade, brother, founding UB40 member and musical legend, Brian David Travers. Brian passed away yesterday evening with his family by his side, after a long and heroic battle with cancer. pic.twitter.com/V3EguMJCYY

Among those replying to the tweet was Jeremy Corbyn, who wrote "So sad for all family and Band. What a legend, what a musician. My sympathies and solidarity with you all."

Travers suffered a seizure early in 2019. On March 28th of that year he underwent a double brain tumour operation to remove two tumours, one 12mm in length, the other 7mm, which had become joined.

Prior to his seizure, Travers had been touring for four years. Incredibly, just a day after his operation he immediately began touring with UB40 again.

Travers' final performance would be in December 2019 in his home town of Birmingham.

The musician underwent a second surgery in January of this year. The procedure was said to be successful.

Travers passed away on Sunday at his home in Birmingham's Moseley district. He was surrounded by his family.

The precise cause of death has yet to be announced.

"All of us at The Brain Tumour Charity are deeply saddened by Brian's death," said Dr David Jenkinson, interim chief executive of The Brain Tumour Charity. "Our thoughts are with his family and friends, and with everyone who was inspired by his career and the success of the band. His loss is a fierce reminder of why we must move further and faster every day in the battle against brain tumours, so that other families do not have to endure this kind of heartbreak in the future."

UB40 was formed in Birmingham in 1978. The band took their name from "Unemployment Benefit, Form 40," a form required for those claiming unemployment benefits. This was an era of mass unemployment in the UK, particularly the Midlands.

The band made its live debut at Birmingham's Hare & Hounds pub in February, 1979. A plaque at the venue now commemorates the event.

UB40 caught a break when Chrissie Hynde saw their performance in a pub and invited them to support her on tour. Their debut album, Signing Off, was released in 1980 and would eventually turn platinum. The band would go on to sell over 100 million albums over their career.

Earlier this summer frontman Duncan Campbell announced his retirement from UB40 after suffering a stroke in 2020.

"Unfortunately, due to continued ill health, I have reluctantly decided to retire from the band so as to focus on my recovery," Campbell said in a statement. "I am very grateful, and would like to express my sincere thanks to the fans for all their support during this time and indeed throughout my time with UB40. The band have my full support going forward and, of course, my very best wishes for the future with their new singer."