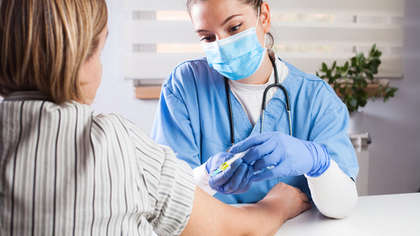 Health Service Executive CEO Paul Reid has announced that booster jabs for the over-50s will be available from mid-December.

It had originally been planned that the group would become eligible in late December.

Reid also confirmed that those considered medically vulnerable – a group that numbers 470,000 people – will be offered boosters from next week.

The HSE CEO highlighted the expansion of the nation's testing capacity with over a million PCR tests carried out over the last six weeks. In the last week more than 210,000 PCR tests were conducted.

Reid said the tests are worryingly still showing "high positivity rates of between 15 and 19%."

Three further testing centres are to open next week with the Defence Forces enlisted to assist with testing.

With the EU's drug regulator approving the use of Pfizer-BioNTech's Covid-19 vaccine for children between the ages of five and 11, Reid said the HSE will examine all options for a rollout of the vaccine to children.

Reid said the HSE wants to administer the vaccine to children in a "safe and pleasant environment." More than 480,000 children will be eligible if approved by government.