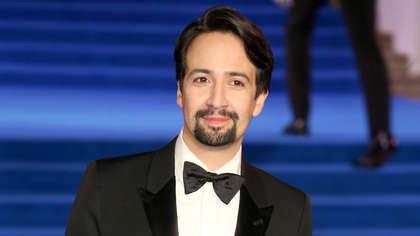 Led by Hamilton creator Lin-Manuel Miranda, hundreds of past and present Broadway stars gathered in New York's Duffy Square on Sunday to pay tribute to the late composer Stephen Sondheim.

Miranda was joined by such notable musical stars as Sara Bareilles, Raúl Esparza, Stephen Schwartz, Laura Benanti, Brian Stokes Mitchell and Josh Groban as part of a massive choir. The choir took its place on Duffy Square's famous red steps to belt out an emotional rendition of the song Sunday from Sondheim's musical Sunday in the Park with George, which scooped the Pulitzer Prize in 1984.

Taking to Twitter after the performance, Bareilles described the occasion as "a tremendous joy."

such a joy. a tremendously aching joy. https://t.co/tKLRtMBYsU

A lifelong fan of Sondheim, Miranda had earlier paid tribute to the composer on Twitter, comparing the Broadway giant to Twitter.

"Future historians: Stephen Sondheim was real," Miranda wrote. "Yes, he wrote Tony & Maria AND Sweeney Todd AND Bobby AND George & Dot AND Fosca AND countless more. Some may theorize Shakespeare's works were by committee but Steve was real & he was here & he laughed SO loud at shows & we loved him& last week, when I wrote him to say his ears must be burning from the countless Sondheim kindnesses being shared from the generations of writers he mentored, he wrote this in reply. Steve: you repaid your debt to Oscar 1000 times over. We love you. I love you."

Future historians: Stephen Sondheim was real. Yes, he wrote Tony & Maria AND Sweeney Todd AND Bobby AND George & Dot AND Fosca AND countless more. Some may theorize Shakespeare's works were by committee but Steve was real & he was here & he laughed SO loud at shows & we loved him

Miranda even included Sondheim as a character in his new film Tick, Tick…Boom!, which just released on Netflix. In the film, Sondheim is played by West Wing star Bradley Whitford, but he also makes a cameo of his own.

A scene in the movie sees the lead character Jon, an aspiring songwriter played by Andrew Garfield, receive an encouraging voicemail from Sondheim. But rather than using Whitford's voice, Miranda had Sondheim record the message himself.

"I was in contact with Steve throughout," Miranda said. "I showed him the pages. I showed him Steve's dialogue. When I showed him the finished film, he said, 'You treated me gently and royally, for which I'm grateful.' And then he wrote me and said, 'But the last phone message to Jon, the language feels a little trite. I don't feel like I would ever really say that. Can I rewrite it?' I was like, 'Gosh, a rewrite from Stephen Sondheim — do I accept this?'"

At this point Whitford had completed his work on the film and was no longer available to rerecord the message. Luckily for Miranda, Sondheim offered to record the piece himself.

"It makes me weep to even think about," Miranda said. "Because he was such a mentor to Jon and generations of songwriters. But yes, he rewrote that message and recorded it himself and just sent it to me."

Since his death on Friday, November 26th, tributes have been pouring in for the composer, whose work includes Company, Sweeney Todd, Into the Woods and the lyrics for West Side Story.

"Farewell Steve, the musical theatre giant of our times, an inspiration not just to two but to three generations," wrote Andrew Lloyd Webber. "Your contribution to theatre will never be equalled."

Andrew will be on @MostRequestLive with @OnAirRomeo on Saturday 11th December at 8pm EST.

You can ask Andrew a question for his @iHeartRadio @AskAnythingChat. Submit yours now: https://t.co/PbvO7LHvqw

"Stephen Sondheim was a gigantic figure in American culture — one of our country's greatest songwriters, a lyricist and composer of real genius, and a creator of some of the most glorious musical dramas ever written," wrote Steven Spielberg, whose new version of West Side Story opens in cinemas this month. "Steve and I became friends only recently, but we became good friends and I was surprised to discover that he knew more about movies than almost anyone I'd ever met. When we spoke, I couldn't wait to listen, awestruck by the originality of his perceptions of art, politics and people — all delivered brilliantly by his mischievous wit and dazzling words.  I will miss him very much, but he left a body of work that has taught us, and will keep teaching us, how hard and how absolutely necessary it is to love."

London's West End will pay tribute to Sondheim on Monday evening when the lights will be dimmed for two minutes at 7pm.