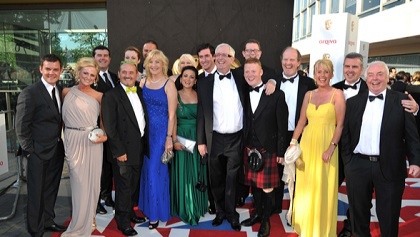 The actor who plays Buster Brady in the comedy series revealed that lockdown has led him to comfort eating, and a weight gain.

The actor took to Twitter to reveal his delight over his weight loss.

Since he became more active, Danny O'Carroll said that he feels so much better about himself.

"Yeah I'm delighted with myself. It was a bit of hard work but I'm getting there", he said. "I'm not there yet but I will get there, I'm determined to get where I want to be so a little bit more work yet".

"I put on a lot of weight over the lockdown", he revealed. "The first lockdown I went and I bought a bike and I started trying to cycle for a while and I got really fed up with it".

"I wasn't a man for going to gyms or anything like that so I put on a lot of weight then over lockdown and I was disgusted with myself".

"All the shows got cancelled again this year and that's one of the reasons I started doing the workouts because I was sitting at home doing nothing".

"I was starting to feel sorry for myself, getting down and it sort of gave me a kick up the a**e to start going again and do something to feel good about myself".

"I never weighed as heavy in my life so I decided to invest in a treadmill".

Danny O'Carroll added that he has a problem with staying focussed and committed, which is why he decided to take his active journey online to stay motivated.

"I got the treadmill and I looked at it for about a week before I used it and it was little comments from my dad that told me not to bother".

"That I've got the O'Carroll genes, big bellies, big arses and it made me determined to get on the treadmill".

"I got on the treadmill and started doing it and then I was thinking to myself, 'How am I going to keep at it?', he continued.

"That's my problem, I'll start something then I'll just get fed up. I decided to start posting it on Instagram as I go and it's just taken off".

"I can't believe the reaction it's getting on Instagram, the messages I'm getting".

"I started off on Instagram as a real selfish type of thing to do to try and get people to motivate me to keep going but actually the tables have turned and people are saying how much I'm motivating them to get up and start doing stuff".

"So we're helping each other and it's a really great feeling".

Danny O'Carroll also talked about certain lifestyle changes he has made which have helped him along the way.

"I eat two/three meals a day, if I can hold off the third meal I will but most of the time I'm usually starving so I'll eat it.

"But I have snacks in between and all I do is count my calories on MyFitnessPal app and that just keeps me going for the whole day."

"I'm not an expert in health and fitness, far from it. I think that's why it's so popular on Instagram with me at the minute because I am just a normal person trying to lose weight". I'm not a gym freak, I don't do the pre workouts, post workout drinks and all that".

Danny O'Carroll's father is of course Mrs Brown's creator Brendan O'Carroll. Danny said that he misses his father, having not seen him for 7 months. Danny currently is living in Donegal with his wife Amanda and their children Jamie and Blake, while father Brendan is currently in the USA.

"He's in good form, he's missing us, he's missing the kids, his grandkids", he added. "He's keeping himself busy at the minute, he's doing a movie over in Atlanta at the moment so he's busy. That'll take his mind off things but it's tough for him too".

We haven’t seen each other in nearly 7 months now. When I finally get to hug you again, I don’t think I’ll be able to let you go.. Happy Father’s Day @brendanMrsBrown ❤️❤️❤️ pic.twitter.com/h0YkKevgzh

"I think we have a live episode we're going to be shooting for the BBC for Halloween in October".

"Then we have the Christmas specials coming up again in December", he added.

"They haven't gone on sale yet but I can 100 per cent guarantee we'll be doing the 3Arena in Dublin and the Odyssey in Belfast", he said. "We'll be doing Belfast and Dublin usually around Christmas so Christmas next year I'd say it'll be happening".

"It better happen next year, I can't do another tour cancelled, no way".