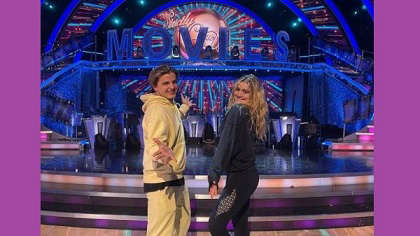 Strictly Come Dancing judge Shirley Ballas and many more jump to the defence of Tilly Ramsay, following a radio host's "chubby" remarks about the 19-year old.

Support is spilling in for 19-year-old Tilly Ramsay after an LBC presenter made nasty remarks about the teenager’s appearance. Strictly Come Dancing judge Shirley Ballas gave her support, along with countless others, to condemn the comments made against Gordon Ramsay’s daughter.

Speaking on his LBC radio show, presenter Steve Allen said Tilly Ramsay “is on Celebrity MasterChef Australia, is she?  Well, she can't blooming well dance - I'm bored with her already. She's a chubby little thing, isn't she? Have you noticed? Probably her dad's cooking I should imagine.”

Competing in this year’s Strictly contest with professional partner Nikita Kuzmin, the 19-year-old was left upset by comments made about her weight. The contestant took to her social media to express her sadness to her one million Instagram followers. Sharing a clip of Steve’s show, Tilly wrote a long post explaining her sadness over the remarks.

Tilly’s post read: “I try not to read and listen to comments and negativity however recently being called out on a national radio station by a 67-year-old man is a step too far. Steve, please feel free voice your opinions however I draw the line at commenting on my appearance.  It's such a shame that someone is trying to make such a positive experience negative. This isn't the first and definitely won't be the last comment made about my appearance and I accept that and I'm learning to accept myself.

“But please remember that words can hurt and at the end of the day I am only 19 and I'm so grateful for all the amazing opportunities I have been able to take part in and I understand that being in the public eye obviously comes with it's own repercussions and I've been aware of this from a young age.

“However, I won't tolerate people that think its okay to publicly comment and scrutinise anyone's weight and appearance. Love Tilly xx”.

Under the post, Strictly judge Shirley wrote, “My darling, having been through this myself I hear you. To me you are beautiful just as you are.” Several of Tilly’s Strictly co-stars also showed support, as well as Great British Bake Off winner, John Whaite. GBBO John said, “He’s a piece of old sandpaper love, worn and used and has nothing to offer the world. And his vicious scratching has only left you polished and more fabulous. Love you.”

Judge Motsi Mabuse added: “I can't believe it how everyone is doing their best to put a show together and working so hard!!! Which means everyone must live with this abuse!!! It’s a shame !!! @tillyramsay you are correct in speaking up for yourself!  This is body shaming on a young girl ! Shameful!!!!! #bekind is not enough here! She deserves a genuine apology!”