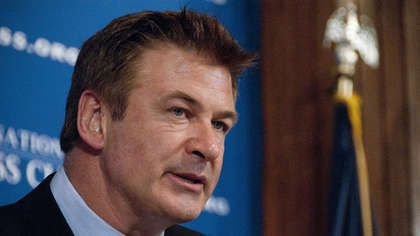 A tragic accident on the New Mexico set of Alec Baldwin's latest film has left a woman dead.

Halyna Hutchins, director of photography for the movie Rust, was killed in an accident involving a misfiring prop gun. The prop weapon had been fired by actor Alec Baldwin.

The film's director, Joel Souza, was also injured in the incident.

Hutchins was airlifted to the nearby University of New Mexico Hospital, but was sadly pronounced dead.

Souza was treated for his injuries at Christus St. Vincent Regional Medical Center, and has since been discharged, according to actress Frances Fisher, who also stars in the film.

A spokesman for Baldwin said the accident resulted from the misfiring of a prop gun loaded with blanks.

"This investigation remains open and active," said Juan Rios, a spokesperson for the sheriff's office. "No charges have been filed in regard to this incident. Witnesses continue to be interviewed by detectives."

Rios also said that detectives were determining how the fatal blank was discharged.

Local paper The Santa Fe New Mexican published photographs of a distraught Baldwin in the parking lot of the sheriff's office. The paper described the actor as being "distraught and in tears while on the phone." Baldwin refused to make any comment to the media.

Rios said Baldwin presented himself to the sheriff's office voluntarily and has not been charged with any wrongdoing.

"We’re treating this as we would any other investigation," Rios said. "Mr. Baldwin was questioned by investigators and released. No arrests or charges have been filed."

Production on Rust, which Baldwin is also producing and co-wrote, has been halted indefinitely.

"The entire cast and crew has been absolutely devastated by today’s tragedy, and we send our deepest condolences to Halyna’s family and loved ones," a spokesperson for the production said. "We have halted production on the film for an undetermined period of time and are fully cooperating with the Santa Fe Police Department’s investigation. We will be providing counseling services to everyone connected to the film as we work to process this awful event."

"The sheriff’s office confirms that two individuals were shot on the set of Rust," an official statement from the sheriff's office reads. "Halyna Hutchins, 42, director of photography and Joel Souza, 48, director, were shot when a prop firearm was discharged by Alec Baldwin, 68, producer and actor."

Ukrainian born Hitchins was a rising star in the field of cinematography. She had previously served as director of photography on the 2020 film Archenemy. That movie's director, Adam Egypt Mortimer expressed his shock at the news of her death.

"I'm so sad about losing Halyna," Mortimer wrote on Twitter. "And so infuriated that this could happen on a set. She was a brilliant talent who was absolutely committed to art and to film."

I’m so sad about losing Halyna. And so infuriated that this could happen on a set. She was a brilliant talent who was absolutely committed to art and to film. ❤️ pic.twitter.com/vcdFqHsGA0

"We are devastated by this tragic news," the Screen Actors Guild said in a statement. "Our hearts go out to the family of Director of Photography Halyna Hutchins who has passed away and to Director Joel Souza who is injured and hospitalized. This is still an active investigation and we do not yet have all the facts. We will continue to work with production, the other unions, and the authorities to investigate this incident and to understand how to prevent such a thing from happening again."

Shannon Lee, whose brother Brandon Lee died in a similar accident on the set of The Crow in 1993, took to Twitter to write "Our hearts go out to the family of Halyna Hutchins and to Joel Souza and all involved in the incident on 'Rust.' No one should ever be killed by a gun on a film set. Period."

Our hearts go out to the family of Halyna Hutchins and to Joel Souza and all involved in the incident on “Rust”. No one should ever be killed by a gun on a film set. Period. 💔

The tragic death of Hutchins comes just a week after a potential strike by Hollywood crew members to highlight dangerous working conditions was averted.