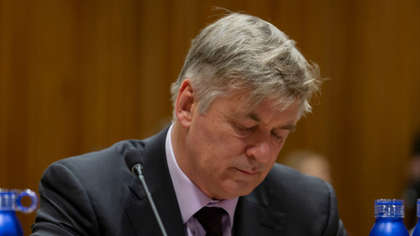 Two crew members involved in the tragic incident that led to the death of director of photography Halyna Hutchins had previously displayed negligence around guns on set.

Assistant director Dave Halls was fired from an earlier production after he violated gun safety procedures.

Armorer Hannah Gutierrez-Reed was once reprimanded for handing a gun to a child on a set, which led to a production being halted.

Hutchins died on Thursday after being shot by a live round unwittingly fired by actor Alec Baldwin on the set of western Rust, which Baldwin is also producing, having co-written the story. The film's director, Joel Souza, was injured by the same bullet when it passed through Hutchins' body.

Baldwin had been told by assistant director Halls that the prop was a "cold gun," meaning it wasn't armed with live rounds. However, the gun was actually "hot", loaded with live ammunition.

It has now been revealed that Halls was involved in a similar incident in 2019, which fortunately didn't result in any deaths.

Halls was fired from the set of Freedom's Path after a crew member was injured by a gun that unexpectedly discharged.

"Dave Halls was fired from the set of Freedom’s Path in 2019 after a crew member incurred a minor and temporary injury when a gun was unexpectedly discharged," a producer for that film revealed. "Halls was removed from set immediately after the prop gun discharged. Production did not resume filming until Dave was off-site. An incident report was taken and filed at that time."

Sources have also revealed that armorer Gutierrez-Reed, who was in charge of prop guns on the set, acted in an unprofessional manner on her previous production, which was temporarily halted after she handed a gun to an 11-year-old child.

"She was a bit careless with the guns, waving it around every now and again," a source from the set of Nicolas Cage film The Old Way said of the armorer. "There were a couple times she was loading the blanks and doing it in a fashion that we thought was unsafe."

A source from the set of Rust described Gutierrez-Reed as "inexperienced and green."

Just last month Gutierrez-Reed appeared on podcast Voice of the West, where she confessed that she wasn't sure if she was "ready" to work on a film set.

"It was a really badass way to start off a really long and cool career, I’m hoping," she said on the podcast. "I just finished up working on The Old Way with Nicolas Cage, his very first Western. It was also my first time being head armorer as well. You know, I was really nervous about it at first, and I almost didn’t take the job because I wasn’t sure if I was ready, but, doing it, like, it went really smoothly."

In a now damning statement, Gutierrez-Reed claimed to have no knowledge of loading blanks.

"I think loading blanks was the scariest thing to me because I was like 'oh I don’t know anything about it'," she candidly confessed.

It has also been reported that the prop gun involved in Hutchins' death, a Colt pistol, had been used for target practice by crew members off the set.

Just hours before the fatal shooting, seven crew members had stormed off the set of Rust in protest at working conditions on the doomed production.

"We cited everything from lack of payment for three weeks, taking our hotels away despite asking for them in our deals, lack of Covid safety, and on top of that, poor gun safety," a crew member wrote in a private Facebook post, according to Deadline. "They brought in four non-union guys to replace us and tried calling the cops on us."