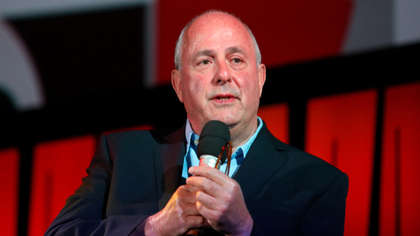 The death of director Roger Michell, best known for the hit romantic comedy Notting Hill, has been announced.

"It is with great sadness that the family of Roger Michell, director, writer and father of Harry, Rosie, Maggie and Sparrow, announce his death at the age of 65 on September 22nd," Michell's publicist announced.

Tributes immediately began to pour in on social media from those who had worked with Michell.

"I loved every minute we spent together. RIP Robert Michell," wrote Notting Hill star Julia Roberts on Instagram, where she posted a photo of Michell on the set of the beloved rom-com.

"So incredibly sad to hear about the passing of Roger Michell, a wonderful director with huge integrity and compassion, in this world his kindness mattered so much to me," Samantha Morton, who acted for Michell in 2004's Enduring Love, wrote on Twitter.

So incredibly sad to hear about the passing of Roger Michell, a wonderful director with huge integrity and compassion, in this world his kindness mattered so much to me. My thoughts and prayers are with his family. Thank you Roger for being so wonderful to us all. Enduring love…

In a Twitter post, actor Sam Neill revealed that Michell and the cast of his recent film Blackbird all got bird tattoos after completing the film.

#RogerMichell. That lovely man. Died in his sleep last night . We the cast , with our director Roger, all tattooed a bird after shooting Blackbird- friends for life. Roger was only 65. We are all gutted. I grieve with his family. Great man. Vale Roger. Xx pic.twitter.com/qCqPSAAUBP

The Office star Rainn Wilson, who also starred in Blackbird, said he "learned so much" working with Michell on the film.

Three tearful cheers to the great director ROGER MICHELL (Notting Hill, Venus, Blackbird). He was a shining gem of wisdom, talent, heart and brilliance. Such perceptive kindness. I learned so much working with him on #Blackbird "And flights of angels sing thee to thy rest.” #RIP pic.twitter.com/5ipoIZR9Rq

Sam Claflin, star of Michell's period drama My Cousin Rachel, described Michell as "one of the finest men I've ever had the privilege of working with."

Mr Michell - you really were one of the finest men I’ve ever had the privilege of working with. Patient. Kind. Loving. Sir, you will be missed. Love to your family. Love to all. Life is too short. ❤️ #RogerMichell pic.twitter.com/jPssDECba0

Born the son of a British diplomat in South Africa in 1956, Michell moved around a lot as a child and teenager before attending Cambridge University. There he began directing plays, winning an Edinburgh Fringe Festival award while still at college.

After graduating in 1978 he landed the role of assistant director at London's Royal Court Theatre. In 1985 he joined the Royal Shakespeare Company.

In the 1990s Michell began working in TV while continuing to direct for the stage. He made his TV directing debut in 1993 with a BBC adaptation of writer Hanif Kuresihi's The Buddha of Suburbia. Two years later he adapted Jane Austen's Persuasion for the BBC, winning a BAFTA award in the process.

In 1997 Michell turned to the big screen, directing My Night with Reg, a screen adaptation of a play he had previously directed. A year later he worked with Julie Walters and Ciaran Hinds with Titanic Town, a drama set in 1970s Northern Ireland.

Michell's work impressed screenwriter/producer Richard Curtis, who hired him to direct his Notting Hill script. Starring Julia Roberts as a Hollywood star who falls for a London bookstore owner (Hugh Grant), the film was a smash hit at the box office and has become one of the most beloved romantic comedies of all time.

Notting Hill's success saw Hollywood come calling and in 2002 Michell left the UK for the US to direct Ben Affleck in the thriller Changing Lanes.

Michell returned to UK where he directed a pair of movies starring a pre-Bond Daniel Craig – 2003's Mother and 2004's Enduring Love. His relationship with Craig saw him tapped to direct Craig's second 007 film, Quantum of Solace, but after disagreements with the producers, Michell dropped out.

Instead he spent the next 15 years directing a series of acclaimed dramas including 2006's Venus, 2012's Hyde Park on Hudson and 2013's Le Week-end.

Michell's final film, The Duke, stars Jim Broadbent in the true story of a London taxi driver who stole Goya's portrait of the Duke of Wellington from the National Gallery in London to highlight the UK government's lack of investment in care for the elderly. The Duke opens in Irish cinemas next February.