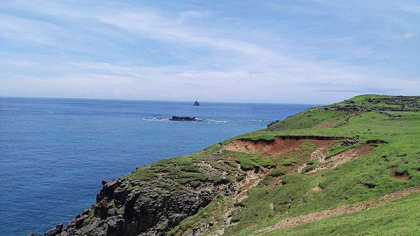 The much coveted caretaker jobs on a remote island which has no running water and electricity have been filled from thousands of applications again this year.

The hunt for new caretakers to take care of a barren island off the coast of Kerry is over as one lucky couple has now been chosen. Great Blasket Island, which has no running water or electricity, has attracted thousands of applicants eager to take on the role.

With more than 100,000 applications in the past three years, the lucky couple has been chosen from the backlog. The new caretakers are understood to be from outside of Ireland and have also dreamed of living on the Blaskets. According to the Irish Times, previous caretakers – Limerick woman Niamh Kelleher and French boyfriend, Jack Cakehead – finished their stint of island life in late September.

Billy O’Connor, who runs the accommodation on the island, said they were not taking new application for the positions this year. Taking to social media, O’Connor explains that he wanted to “update everyone who has emailed and enquired regarding the caretaker position”.

“This year – due to the phenomenal volume of previous applications (of which we want to thank everyone) we have our duo picked. We hope to reopen on April 1, proving all things COVID-19 keep at bay. Again, [we want] to thank everyone for their continued support and we look forward to welcoming people back this year.”

No permanent residents have lived on the island since it had been deserted in the 1950s, when emergency services failed to reach it in a storm. Mr O’Connor, and his partner Alice Hayes, own three cottages, which are rented out to holidaymakers, and a coffee shop on the island.

The pair have been inundated with enquiries by phone, email, social media messages, and paper applications since the position first advertised three years ago. People from all over the world, such as Mexico, Finland, and Argentina, have registered their names for the stint. More than 40,000 applications were received by Mr O’Connor and Ms Hayes in the first year of advertising alone.

The Great Blasket Island, located about three miles off the coast of Dingle, Co Kerry, carries a bit of history with it. The barren land was once home to late author and storyteller, Peig Sayers, whose writings helped form part of the Leaving Cert Irish curriculum. However, it has been home to Niamh and Jack over the past several months, who have been performing essential work on the island.

According to Mr O’Connor, the island had been purchased by his grandfather and granduncle, before resulting in lengthy, and costly legal battles. During the battle of ownership, the case had been brought before the High and Supreme Courts where the State and former Taoiseach, Charles Haughey, argued for ownership and usage rights.