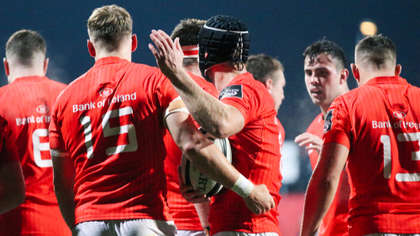 Munster's touring party of South Africa has been rocked by a further nine positive tests for COVID among players and staff.

It follows the news that a player tested positive on Sunday.

Minister for Sports Jack Chambers said yesterday that Munster had been cleared to return home. Now the 10 who have tested positive must remain in South Africa until they complete their isolation periods.

The group of 10 have been relocated to a Cape Town hotel that has been designated for quarantine. The rest of the squad are isolating at the team hotel.

A third round of PCR testing was taken this morning. Munster will await the results before making a decision on when to depart for home.

Munster travelled to South Africa two weeks for two games which were ultimately postponed due to the emergence of the Omicron variant in the country.

They had hoped to return home on a flight on Sunday but were forced to remain in South Africa when a COVID test came back positive.

"Munster’s latest round of PCR testing has identified nine positive cases," the team said in a statement. "The group, including staff and players, will move to the designated quarantine hotel in Cape Town joining the first player who tested positive on Sunday. The remaining party of 38 have all returned negative results and continue to individually isolate in their rooms where they have been based since Sunday night. As outlined by the Irish government on Monday, those that have received negative results have clearance to travel from the South African authorities."