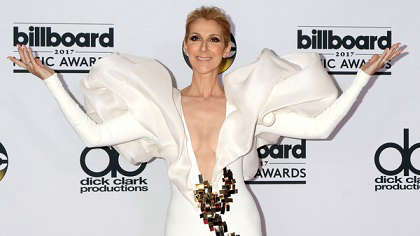 Celine Dion gave her fans a reason to celebrate and feel inspired as she revealed on social media that her album, Courage, marked a major milestone.

Celine Dion fans have been given a reason to celebrate and feel inspired as the singer revealed her 2019 album, Courage, marked a major milestone. Taking to social media in a heart-warming post, the superstar singer’s team reminded fans that her latest studio record was celebrating its second birthday.

Celine looked astonishing in several pictures posted on her page from behind the scenes of a shoot. For one image, the singer rocked a skin-tight latex mini dress with her hair tied up.

The Canadian musician radiated a bright smile for the camera as the caption written by her team read: “Today, 'Courage' turns 2! Two years ago, Celine's latest album 'Courage' was released. Looking back over the last two years, we could never have predicted the challenges we would face. It took, indeed, a lot of courage from us all to navigate through the storm. What song from this album has a special meaning to you? -TC.”

Fans flooded the comments section to pay tribute to the superstar, revealing their top picks from the 2019 album. One wrote: “We miss that smile so much, Courage is a masterpiece, promote it please TC,” while another added: “Falling in love again.”

One fan in particular had left a heartfelt comment to the singer, saying: “What an album!! An absolute masterpiece with no skips. You took us to church with 'The Hard Way'. We're hoping to see you performing it live for the first time!! Take care Queen we miss you.”

Fans also took time to pray for her speedy recovery, following the postponing of her Las Vegas residency due to health issues. Taking to Instagram to release an official statement, the singer revealed she has been suffering from “severe and persistent muscle spasms”. In a heart-felt message to fans, the singer shared, “I'm heartbroken by this”.