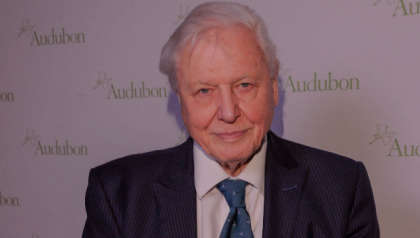 Sir David Attenborough has paid a special tribute to Queen Elizabeth II, saying that the "whole nation is bereaved" following her death.

Queen Elizabeth II died earlier this week at her retreat in Balmoral Castle, Scotland. She was surrounded by her children and her extended family. She was 96 years old.

Sir David Attenborough was knighted by the Queen back in 1985.

“If there was a technical hitch, she wanted to know what it was, and if it had a funny side, she was quick to see the joke", Attenborough said in a statement.  “Yet not for one second could you forget that you were in the presence of someone who had willingly accepted enormous responsibility and dedicated her life to serving the nation – that you were, in short, in the presence of royalty".

“The whole nation is bereaved".

Attenborough also paid homage to the Queen for her work on the pair's 2018 documentary The Queen's Green Planet, which focused on the Queen's Commonwealth Canopy project, aiming to create a global network of protected forests in each of the 53 Commonwealth countries.

Attenborough also helped to produce the Queen's festive messgaes during the 1980s and 1990s.

“She was an expert at getting people to relax. When you met her you were well-aware that you were in the presence of someone who was extremely important to our society and yet she made it seem that you were meeting another human being with exactly the same conditions that all human beings have", the presenter added.