This Week's New Movies – Halloween Kills, Venom: Let There Be Carnage and more… 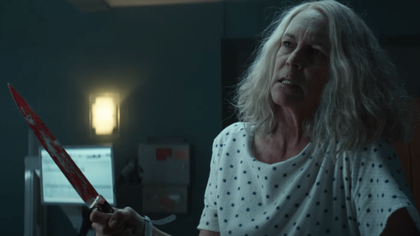 Arracht [Cinemas]
This Irish language drama was Ireland's selection for the most recent Academy Awards. Set during the Great Famine, the film sees a farmer go on the run when he's accused of the murder of the ruthless landlord who raised his rent amid the potato blight.

The Four of Us [Netflix]
Two couples travel to a remote beach hut to face the emotional fallout of a partner swapping experiment that led to unexpected consequences.

The Forgotten Battle [Netflix]
Dutch war movie sees the lives of a pilot, a Nazi soldier and reluctant Dutch resistance fighter intersect during the WWII Battle of the Scheldt.

Halloween Kills [Cinemas]
Michael Myers returns for another stabbing spree. Wait, wasn't he killed at the end of the last instalment? Come on, you can't kill the bogeyman. Jamie Lee Curtis returns once again to the role that made her a star way back in 1978 for the latest chapter of the long-running slasher franchise.

Hiacynt [Netflix]
Thriller set in Cold War era 1980s Poland. Unhappy with the official result of a murder investigation, a young detective sets out to solve the case himself.

I Am Belmaya [Curzon Home Cinema]
Documentary follows Belmaya Nepali, a young Nepalese woman who defies both her husband and her patriarchal community to follow her dream of becoming a filmmaker.

The Invisible Life Of Euridice Gusmao [Cinemas]
Drama set in 1950s Brazil. When a teenager becomes pregnant she is banished from the family home by her strict conservative father. Her younger sister is told she left for college in Europe, oblivious to the fact that she's really living a rough life in the streets of her own town.

The Last Duel [Cinemas]
Remember how Matt Damon got stuck in Dalkey during the pandemic? He was here to film The Last Duel, which tells the story of the last officially sanctioned duel fought in France. Damon plays a knight who challenges Adam Driver's nobleman to a duel to the death when the latter is accused of sexually assaulting the former's wife (Jodie Comer).

The Medium [Shudder]
Horror from Thailand. A film crew follows a young woman who appears to have psychic powers, but things take a dark turn when her true nature is revealed.

Never Gonna Snow Again [Cinemas]
Poland's entry for last year's Oscars follows a Ukrainian immigrant working as a masseuse in Warsaw. His powers of relaxation see him growing a cult following among the city's wealthiest elites.

The Outsiders: The Complete Novel [Cinemas]
Director Francis Ford Coppola has revisited his 1983 teen drama and recut the film with an extra 22 minutes of unseen footage. The movie now features a new beginning and ending that Coppola feels is more in keeping with the original S.E. Hinton novel, along with new music.

Ron's Gone Wrong [Cinemas]
In this animation a socially awkward boy receives a gift of a robot best friend, only for the latter to malfunction and launch the pair on an adventure.

The Trip [Netflix]
A couple travel to a remote cabin for a romantic break, unaware that they both plan on murdering thei other half. When they get there they're forced to put their squabbles aside when their lives are threatened by mobsters.

Venom: Let There Be Carnage [Cinemas]
Tom Hardy returns to the role of Eddie Brock, the journalist whose body plays host to Venom, an intergalactic parasite. This time Brock and Venom must work together to battle a new enemy in Woody Harrelson's Carnage.