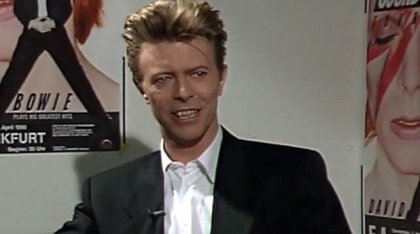 A painting by music legend David Bowie which was bought for five Canadian dollars at a landfill is expected to sell for thousands of dollars at an auction.

The portrait dates back to 1997 and is titled, "DHead XLVI". It was found at a donation centre at an Ontario landfill last Summer.

The person who bought it was unaware that it was a Bowie painting, is not an art collector and wants to remain anonymous. Bowie's signature, as well as his name and description “acrylic and computer collage on canvas” are on the back of the portrait.

Bowie had often painted portraits of himself, as well as musicians, family and friends as part of the DHead series. He never revealed his subjects in these individual pieces however.

The painting was intially expected to sell for around $10,000. However, bids for the piece have soared since the first day, with the highest bid currently standing at $22,100 with eight days of the auction remaining.

"The painting itself caught their eye”, Robert Cowley said regarding the painting's current owner.  Cowley is from Cowley Abbot who are running the auction.

Cowley also added that the piece is a "striking portrait", but the subject of the painting is unknown.

"In this case, even the gender is difficult to discern because it doesn't have any facial features besides the side profile", Cowley added. "It's quite a striking portrait, but it's very difficult to say exactly who it might be".

Check out the Cowley Abbot website for more details.

"I knew what it was straight away"

When Cowley Abbot were contacted by the owner, they set about trying to authenticate the piece. They enlisted the services of Bowie expert, Andy Peters who said “When I first saw the painting, I knew what it was straight away”. Peters also collectes Bowie autographs.

“I did not need to see the autograph on the back because I knew, but obviously the signature sealed the deal", he added.

“The confusion lies in that he changed his signature so much during his 55-year career, but there are certain nuances in every single autograph that forgers cannot replicate".

To mark five years since his death, Duran Duran released their cover of the singer's track "Five Years", earlier this year. Check it out below.