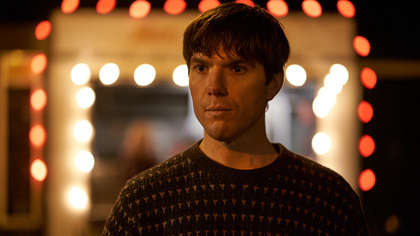 Written and directed by Seán Breathnach, Foscadh is based on characters from Donal Ryan's novel The Thing about December.

The film stars Dónall Ó Héalai as John Cunliffe, a reclusive 28-year-old who inherits his family's Connemara land when his parents pass away. The land happens to be in the way of a proposed wind farm, which puts him in opposition with land developers.

Foscadh's official synopsis describes the film as "a poignant meditation on isolation, neurodiversity, and letting go of the past."

Ó Héalai describes his character as having been "sheltered all his life by his parents. When he loses them, his story is him becoming an adult, and all that entails."

Foscadh was produced by Paddy Hayes, whose father Tom Hayes was nominated for an Oscar 50 years ago in 1961 for the documentary Cradle of Genius. A good omen perhaps?

Foscadh is expected to release in Irish cinemas later this year. It received its world premiere earlier this year at the Galway Film Fleadh, winning Best Irish First Feature at the Festival’s Awards.

"The Irish Academy is delighted to announce Foscadh to represent Ireland," Moriarty said. "This is a stunning debut feature from Seán Breathnach with its beautiful tranquil depiction of the West of Ireland. Its subtle and brilliant storytelling will no doubt resonate with international audiences of any language. The vulnerability and isolation captured in Dónall Ó Héalai’s striking lead performance is yet another reminder of the acting talent in this country."

"It truly is both an honour and a privilege to be chosen by IFTA to represent Ireland in the Academy Awards Best International Film category," writer/director Seán Breathnach said upon receiving the news that his film would represent Ireland. "We are beyond thrilled that Foscadh (Shelter) is garnering such a positive reaction from critics and festivals alike, following on from its Best First Film award at the Galway Film Fleadh."

"I think Foscadh (Shelter), with its searing tale of a young recluse overcoming personal adversity, will really resonate with Academy members and has a real shot of making the shortlist," said the film's producer Paddy Hayes. "I look forward to building an Oscar campaign around it in these coming months. My own father Tom Hayes was Oscar shortlisted in 1961 for his film Cradle of Genius so it would be great to finally live up to his expectations 50 years later!"

To qualify for the Best International Feature Film category, a film must have been predominantly made in a language other than English. In recent years Ireland has selected films like the Arabic language documentary Gaza, Spanish language drama Viva, Serbo-Croatian language As If I Am Not There, and Irish language films Song of Granite and Kings.

The contenders will be whittled down to 15 films on December 21st, with the final five Oscar nominees selected on February 8th, 2022.

The 94th Academy Awards ceremony is scheduled to take place on March 27th, 2022.

You can watch the trailer for Foscadh below.