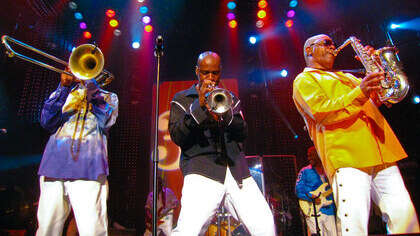 Founding member of disco/funk legends Kool & the Gang, Dennis "Dee Tee" Thomas has died at the age of 70.

If you've ever attended a wedding reception, chances are you've embarrassed yourself on the dancefloor to Kool & the Gang's hit Celebration.

One of the men responsible for that iconic party staple, Kool & the Gang founding member and saxophonist Dennis Thomas has passed away. Thomas died in his sleep on Saturday, according to a statement.

"An original member of Kool & the Gang, Dennis was known as the quintessential cool cat in the group, loved for his hip clothes and hats, and his laid-back demeanor," the remaining members of Kool & the Gang wrote in a statement on Facebook. "A huge personality while also an extremely private person, Dennis was the alto saxophone player, flutist, percussionist as well as master of ceremonies at the band's shows."

The statement also credited Thomas as "the group’s wardrobe stylist who made sure they always looked fresh."

Thomas's final appearance with the band came as recently as July 4th when Kool & the Gang opened the 2021 season at the Hollywood Bowl venue in Los Angeles. CNN called the event "the opening of America" as it was one of the first live events to take place before a crowd since the start of the pandemic.

Along with brothers Ronald and Robert "Kool" Bell, Spike Mickens, Ricky Westfield, George Brown, and Charles Smith, Thomas formed the group in 1964 while they were still teenagers. Initially known as The Jazziacs, the band tried out several names before settling on Kool & the Gang in 1969. That year they released their eponymous debut album.

It would take their fourth album, 1973's Wild and Peaceful, for Kool & the Gang to have breakout success. That album spawned two US Top 10 singles in Jungle Boogie and Hollywood Swinging.

For the rest of the decade Kool & the Gang struggled to repeat their success. In 1979 they made two additions that would change their course forever. A lead vocalist was added in James JT Taylor, known for his smooth vocal style. The band enlisted a new producer in Brazilian Eumir Deodato, who established the tropical sound they would become known for in the 1980s.

1979 and the early '80s would prove Kool & the Gang's most successful era. Their 1979 album Ladies Night found them a new audience with the disco crowd as they moved away from their heavy funk sound to a more commercial format. That album delivered the hit singles Ladies Night and Too Hot, and would sell over a million copies in the US alone.

In 1980 the band released the album and subsequent single that would cement them as party favourites for decades to come. The album Celebrate would prove their biggest success to date, while the single Celebration saw them score their first ever number one on the US Billboard chart. The song became an instant anthem and was played at the 1980 World Series, the 1981 Super Bowl and the 1981 NBA Finals, not to mention literally every wedding reception since.

By 1986 Kool & the Gang had seen 14 of their singles enter the US Top 40, a higher number than even Michael Jackson.

In the 1990s Kool & the Gang would be sampled by multiple hip hop artists including Jazzy Jeff & the Fresh Prince, Ice Cube and Snoop Dogg.

A fixture of the band since its inception, Thomas played on every one of their albums, including the yet to be released Perfect Union. His death comes a year after the passing of his bandmate Ronald Bell.