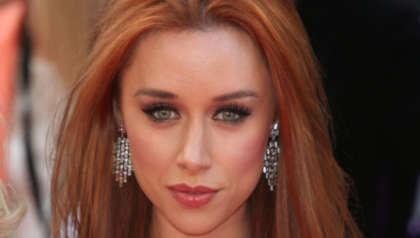 Una Healy has said that she would relish the opportunity to write a song for the Eurovision Song Contest.

The former Saturdays singer has revealed that she would love the chance to write an "amazing" tune that would see Ireland qualify for the final of the competition.

Healy had previously served as a backing singer for Brian Kennedy when he represented Ireland at th 2006 Eurovision Contest in Athens. Kennedy's entry 'Every Song Is A Cry For Love' finished 10th in the final, with Finland's band Lorde winning the contest.

However, the Tippearary native insisted that she would not perform the track herself. "I don’t know if I would like to perform but maybe to write something for it. To write an amazing song, that would be a dream".

Healy also insisted that the chance to represent Ireland at the Eurovision is “nothing to turn your nose up at '.

She continued, “Eurovision is nothing to turn your nose up at. It is a huge launch pad for so many artists. See Sam Ryder there now…He’s talented. It shows the UK to come second in this day and age, you thought that would never happen again but it just proves that the public have a bigger say now with the voting system".

Una also claimed that the voting systems is fairer. “It is a lot fairer so yeah no I would love to do it again. 2006 was a long time ago. If I could have a go at it in some shape or form, I wouldn’t say no".

The singer also added that she has fallen back in love with writing songs, for the first time in two years.

“I didn’t find myself inspired by the pandemic, some people really said it was a great time to write – I was the opposite. I was like no, I’m trying to adjust to this whole new life and settle back into Ireland so now that I am settled, I think it is time to start writing again and I’ve a few more things going on", she said.

“I’ve been writing since I was 12. It’s always been something I did because I loved it, not because I had to. That should never be the case. I did it before. That's kind of went back to my roots again".