City Centre Portaloos Removed Due to "Lack of Use" 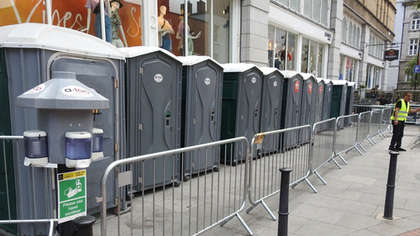 The majority of the portable toilets that had been installed in Dublin's city centre in recent weeks have been removed due to a lack of demand for the facilities.

More than a hundred of the portaloos were installed by Dublin City Council to facilitate the reopening of outdoor hospitality at the start of June. The move was in response to reports of mass gatherings leading to revellers urinating in the street.

The council now claims that demand for the facilities has significantly dropped. Most of the city centre's portaloos have now been removed. Toilets at Grafton Street and Wolfe Tone Square have been left intact and will remain in place for the foreseeable future.

"The toilets at these locations were removed due to lack of use by members of the public," a council spokesperson said.

"Usage figures at all Dublin City Council’s public toilet facilities, both temporary and permanent, are monitored on a daily basis. It became apparent that the limited usage figures did not justify continued provision."

The council noted that most visitors to Dublin City Centre are availing of facilities provided by retail and hospitality businesses.

"A significant number of these businesses provide toilet facilities for their customers," their spokesperson said.

Dublin City Council claims it is "committed to finding a longer term permanent solution to public toilet provision in the City over the coming months."