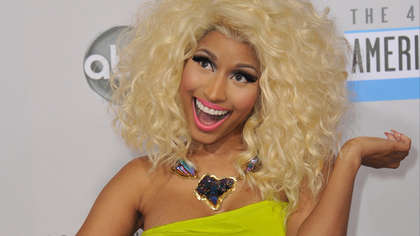 Nicki Minaj has become embroiled in a spat with several prominent Brits, including Boris Johnson, over her vaccine stance.

The rapper revealed that she wouldn't be attending New York's Met Gala as entry to the event required proof of vaccination. Minaj said she had yet to take the vaccine as she was still "researching" its effects.

Minaj then claimed a friend of her cousin had been left impotent after taking the vaccine.

"My cousin in Trinidad won’t get the vaccine cuz his friend got it & became impotent," the rapper wrote on Twitter. "His testicles became swollen. His friend was weeks away from getting married, now the girl called off the wedding. So just pray on it & make sure you’re comfortable with ur decision, not bullied."

My cousin in Trinidad won’t get the vaccine cuz his friend got it & became impotent. His testicles became swollen. His friend was weeks away from getting married, now the girl called off the wedding. So just pray on it & make sure you’re comfortable with ur decision, not bullied

"I’m not as familiar with the works of Nicki Minaj as I probably should be, but I’m familiar with Nikki Kanani, superstar GP of Bexley who has appeared many times before you, who will tell you that vaccines are wonderful and everybody should get them," Johnson replied. "So I prefer to listen to Nikki Kanani."

This prompted Minaj to reply to Johnson on Twitter.

"Send this to the prime minister and let him know they lied on me," Minaj wrote. "I forgive him. No-one else. Only him."

The caption accompanied a video in which Minaj addressed the Pm in a fake British accent.

"Yes, hello Prime Minister Boris, it’s Nicki Minaj," the video begins. "I was just calling to tell you that I thought you were so amazing on the news this morning and I’m actually British. I was born there, I went to university there, I went to Oxford. I went to school with Margaret Thatcher and she told me so many nice things about you. I’d love to send you my portfolio of my work, since you don’t know much about me. I’m a big, big star in the United States."

🇬🇧 🇬🇧🇬🇧🇬🇧🇬🇧🇬🇧🇬🇧 send this to the prime minister & let him know they lied on me. I forgive him. No one else. Only him. 🙃 pic.twitter.com/ZmJ2sST8Es

"People go around trying to discourage other people from taking a vaccine which could be life-saving or prevent them from having life-changing injuries to themselves," Whitty said, addressing a press conference. "Many of those people I regret to say will know they are pedalling untruths but they still do it. In my view, they should be ashamed."

Minaj retweeted a video of Whitty's comments with the caption "I love him even tho I guess this was a diss? The accent ugh! Yassss boo!!"

"Professor Whitty beefing with the ghastly @NICKIMINAJ (one of the rudest little madams I’ve ever met) is not the breaking news that I expected today - but it’s most welcome," Morgan tweeted. "She’s peddling lies that will cost lives."

Minaj replied with the message "Sir I’ve never met you. I know… We all look alike. 'Rudest little madam'. I like it. Has a special ring to it. Thanks Pierce. Love the accent. I’d love to come chat. Scones. Tea. Clown nose & big red shoes for you. Lmk babe."

Morgan replied to the rapper, pointing out that they had run into one another while he was hosting America's Got Talent in 2011. Morgan claims to have asked Minaj for a photo with his sons, a request she turned down.

Madam, we met on @AGT when you appeared as a guest act - but you refused to say hello to my three young sons because you were ‘too busy’. Oh, and it’s ‘Piers’ - I know, we Brit names all sound alike. https://t.co/twedCv1Fae

Minaj then accused Morgan of lying, saying she never turns down requests from kids. She also claimed she had never appeared on AGT. When a fan tweeted a video of her AGT appearance she claimed "That's not me."

Asked if Twitter would be taking action against Minaj for her claims, a spokesperson for the social media app replied "The tweets referenced are not in violation of the Twitter Rules."