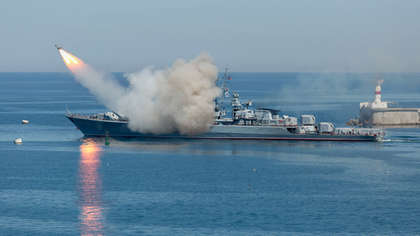 Minister for Foreign Affairs Simon Coveney has said Russia's training exercises off the Irish coast are "not welcome."

Russia's Navy plans to test missiles in international waters 240 kilometres off the Irish coast in February.

The area in question falls within Ireland’s Exclusive Economic Zone and is patrolled by Irish Naval ships and Air Corps Casa aircraft.

Coveney has said he spoke to the Russian ambassador and told him now is not the time for such an exercise. He is set to discuss the matter with his EU counterparts in Brussels today.

"That is in international waters but it is also part of the Exclusive Economic Zone of Ireland," he said. "And so we don’t have the power to prevent this happening. But certainly, I’ve made it clear to the Russian ambassador in Ireland, that it’s not welcome. This isn’t a time to increase military activity and tension in the context of what’s happening with and in Ukraine at the moment. And so I think it’s important that I would brief my colleagues on those intentions."

"Russia, under International Law of the Sea, can of course undertake military exercises in international water but the fact that they’re choosing to do it on the western borders of the EU, off the Irish coast, is something that in our view is simply not welcome and not wanted right now, particularly in the coming weeks," he added.

Speaking of Russia's suspected intention to invade Ukraine, Coveney said such actions would lead to "very severe consequences" for Russia "in terms of sanctions and restrictions that would follow very quickly."

"We’ve just come from a an informal meeting in Brest a week ago and I can tell you the discussions that we had in relation to Russia and Ukraine was a discussion where ministers put their scripts aside and started speaking to each other in very blunt terms about the need for EU unity, strong messaging to Russia and a focus on defusing tension rather than increasing tension," he said. "But should Russia decide to take military action against Ukraine, I think there will be a very strong resolve to act in a very decisive and united manner."