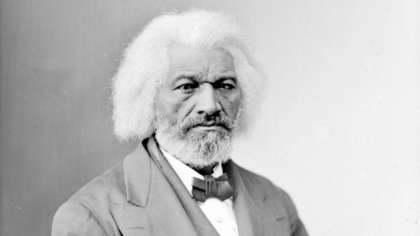 Anti-slavery leader Frederick Douglass, who visited Ireland in 1845, has been honoured with a Dublin City Council Commemorative Plaque.

The plaque is mounted at the entrance to the Irish Film Institute on Eustace Street, Temple Bar.

The IFI is housed in what was once the Quaker Friends' Meeting House.

In 1845, while promoting his autobiography - Narrative of the Life of Frederick Douglass, an American Slave, Written by Himself – Douglass was invited to speak at the location as a guest of Dublin's Quaker community.

"On 9th September 1845, in this building which is now home to the IFI, Frederick Douglass delivered a stirring oration against slavery and in defence of human liberty," said Professor Margaret Kelleher, Chair of the Board of the Irish Film Institute. "We at the IFI are very proud to mark today not only such a historic event but also his continuing legacy and inspiration."

The plaque was officially unveiled by Dublin Lord Mayor Alison Gilliland, who remarked "I am proud that Dublin City is honouring the memory of Frederick Douglass here today, with a plaque that tells all who see it that back in 1845, he found himself welcomed with, in his own words, 'a total absence of all manifestations of prejudice…' and was treated 'not as a colour, but as a man'."

"This plaque to Frederick Douglass sees the great African-American anti-slavery leader recognised by our City for his immense contribution to human liberty and progress," said Councillor Mícheál Mac Donncha, who originally proposed the plaque. "It is appropriate that this site links the United Irish Society which met here in the 1790s, the Society of Friends which hosted Frederick Douglass and still meets on this street, and the Irish Film Institute, a cultural hub of Dublin. Acts of commemoration such as this serve to remind us that while slavery was abolished in the United States, racism persists and needs to be opposed vigorously in all countries including our own."