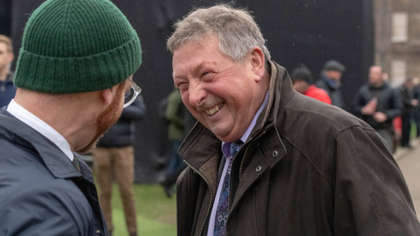 A vocal critic of lockdown measures, Wilson responded to the Stormont Executive's announcement of new restrictions by tweeting his own version of the Christmas carol Hark the Herald Angels Sing.

"Hark the herald angels ping," Wilson tweeted. "Robin Swann won’t let us do a thing. No more parties, work at home. In the streets you cannot roam. Omni is far worse than the delta curse. Stay at home. Or they’ll be far worse to come."

The latest restrictions had received the backing of Wilson's own party as DUP First Minister Paul Givan and deputy First Minister Michelle O’Neill and Health Minister Robin Swann in announcing the closure of nightclubs and other measures.

It's the second time Wilson has adapted a Christmas carol to criticise Stormont's approach to curbing the pandemic.

"Ding dong merrily on high will be replaced this Christmas by ping-dong miserably we sigh," he tweeted last month, announcing his intention to vote against COVID restrictions. "I will vote against new restrictions in Parliament today. They are not proportionate to deal with the spread of the mild omicron variant."

"Thoroughly disrespectful to so many and nothing short of pathetic," he said. "Sadly not unexpected."