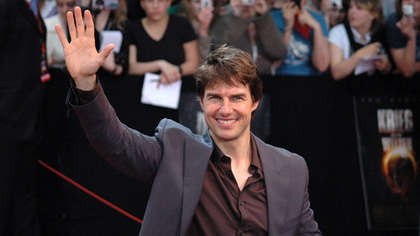 Tom Cruise has fallen victim to hi-tech car thieves while filming in Birmingham.

While shooting in the English Midlands city, Cruise has been driven around in a BMW X7 with a value close to £100,000. When the actor's driver parked it outside one of the city's top hotels - the Grand Hotel on Church Street - thieves seized the opportunity to strike. Guests at the hotel are advised to park their vehicles in a nearby secured car park, but Cruise's driver opted to leave the expensive car in front of the hotel.

The thieves are believed to have pulled off a hi-tech theft worthy of Cruise's own Mission Impossible series.

Using a special scanning device, the thieves were able to replicate the signal required to activate the BMW's keyless ignition fob. One thief tried to open the car's door, which emitted the signal. A second thief stationed nearby recorded the signal with his scanner and bounced it to Cruise's driver's ignition fob while he was inside the hotel. This unlocked and activated the car, allowing the thieves to take off.

Not only did the thieves swipe the car from right outside a busy hotel, but the theft was pulled off just a two minute walk from the headquarters of the West Midlands police.

59-year-old Cruise had spent the day filming scenes in a Birmingham shopping centre with his 39-year-old co-star Hayley Atwell, to whom he has been romantically linked.

The actor is said to have been incensed upon learning of the theft, as he had left luggage worth thousands inside the vehicle.

"Tom had been driven around in the car while in Birmingham and some of his ¬luggage and belongings were inside it when it was taken," a source close to the star revealed. "It’s since been recovered by police because it was equipped with an electronic tracking device but everything inside it had gone. It’s a huge embarrassment for the security team and the guy who had been driving it was hopping mad — but not as mad as Tom."

A police spokesperson confirmed that the car had been retrieved.

"We received a report of a BMW X7 stolen from Church Street, Birmingham in the early hours of Tuesday morning," they said. "The car was recovered a short time later in Smethwick. CCTV enquiries have been made in the area that the car was recovered from. Inquiries are ongoing."

BMW have supplied Cruise with an identical replica of the stolen car.

The theft is the latest trouble to strike Cruise during his time filming the latest Mission Impossible movie. The production has been shut down several times due to COVID outbreaks. Last year audio was leaked of Cruise remonstrating with crew members for failing to comply with COVID procedures. "If I see you do it again you're f**king gone," he was heard to yell at the offending parties.

In recent weeks things seem to be going to plan on set of the blockbuster. A major stunt involving a train plunging over a cliff face was filmed by onlookers last week.

Last year Cruise was seen pulling off a stunt that saw him ride a motorbike over a cliff in Norway before descending by parachute to the valley below.

Attendees at this week's CinemaCon convention in Las Vegas were treated to a more detailed look at the stunt. Paramount unveiled behind the scenes footage that showed how Cruise worked with his stunt crew to pull off the daredevil act. To prepare for the stunt, Cruise was required to undergo 500 hours of skydiving training, while a whopping 13,000 practice jumps were performed.