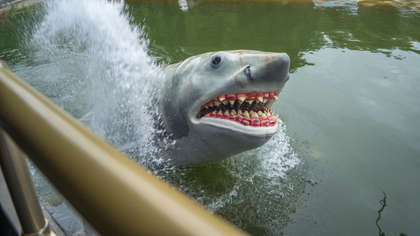 Steven Spielberg's 1975 blockbuster Jaws may not seem the likeliest movie to inspire a stage play, but that's the case with The Shark is Broken, which just opened in London's West End.

For those who haven't seen Jaws (who hasn't seen Jaws?), it's the story of the small island community of Amity, which finds itself under siege from a 25 foot Great White shark. Teaming up to hunt down the carnivorous killer are the town's police chief Martin Brody (Roy Scheider), crusty fisherman Quint (Robert Shaw) and young oceanographer Matt Hooper (Richard Dreyfuss).

In the film the three characters spend a lot of time bickering, and that was the case off-screen between the three actors.

Jaws was an infamously troubled production, running wildly over budget and past its schedule. Many of its issues stemmed from "Bruce", the mechanical shark that stood in for a real Great White. Constantly breaking down, a familiar refrain from crew members was "The Shark is Broken."

The Shark is Broken is now the title of a West End play that takes us behind the scenes of the troubled shoot.

With constant delays, Scheider, Shaw and Dreyfuss were forced to spend weeks together in close quarters, driving each other mad. This strained dynamic is the focus of the play, which is written by Shaw's son Ian and Joseph Nixon. Ian Shaw plays his father, with Demetri Goritsas as Scheider and Liam Murray Scott as Dreyfuss.

The play first premiered to rave reviews at the 2019 Edinburgh festival and has now hit London's West End for a 14 week run at the Ambassadors theatre.

The play takes us back to Martha's Vineyard, 1974, where Scheider, Shaw and Dreyfuss find themselves stuck on a boat while the film's crew deal with the latest mechanical shark breakdown. With much alcohol ingested, the three actors begin to bicker.

The play is set in a replica of The Orca, the boat the film's heroes set off in to take down the shark, only to quickly realise they're "gonna need a bigger boat."

"It's kind of gone into legend really, because the difficulties they had with the mechanical shark were extensive," Ian Shaw in an interview with Sky News. "These three actors, with very distinctive personalities and at different stages in their careers, were kind of stuck together. We all know what it's like to be in confined spaces, you know? And with different personalities, there can be quite a clash, and there certainly was between Richard Dreyfuss and Robert Shaw."

Despite the well-documented clashes, Dreyfuss has maintained that he got on well with Shaw. Ian surmised that his father may have purposely riled up the younger actor to help with his performance.

"It's interesting as to whether my father was doing it partly to get a better performance out of Richard," he mused. "I think there was a little bit of edge in real life between Robert and Richard, and that does show on the screen."

Ian was initially worried about how his father's legacy might be represented by the play.

"I didn't want to do it initially," he confessed. "When I first mooted the idea, which I thought was possibly a good idea, I thought 'I'm studiously trying to avoid association with my father in the first place', and then to write something about my dad, which might not show him in his greatest light was a concern. I felt very reluctant to engage upon it. But I do think it's a good story."

Ian hopes his play will attract an audience beyond the film's fans.

"It doesn't require a watching of Jaws," he said. "It's a comedy, first and foremost... I think it's on occasion moving, but predominantly it is a comedy - so I think audiences will hopefully laugh and be entertained and stimulated."

An exclusive first look at the cast of #TheSharkIsBroken, now playing at the #AmbassadorsTheatre. 🦈