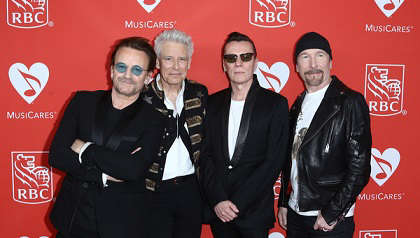 In a new interview on the Awards Chatter podcast, Irish rocker Bono admitted that he gets “embarrassed” listening to old U2 songs and dislikes the band’s name.

The band, comprised of frontman Bono, The Edge, Adam Clayton and Larry Mullen Junior, originally met as schoolmates growing up in Dublin. Since then, however, the quartet have amassed ten UK number one albums, selling more than 157 million records over a 40-year career.

On the Awards Chatter podcast Bono, joined by bandmate The Edge, said: "I've been in a car when one of our songs has come on the radio, and I've been the colour of - as we say in Dublin - scarlet.

"I'm just embarrassed. I do think U2 pushes out the boat on embarrassment quite a lot.

Bono did say that the band’s 2004 hit Vertigo was one exception before adding : "Most of the other ones make me cringe a little bit.”

Conversation later turned to the topic of the band’s now-famous moniker, where both Bono and The Edge admitted that neither they nor their bandmates were ever particularly fond of the title.

According to The Edge, the group had originally been called The Hype before the idea was scrapped for being unoriginal and obvious. It was friend and graphic artist Steve Averill who finally came up with the suggestion to call the band U2.

The Edge recalled: "Of the suggestions, it wasn't that it jumped out to us as the name we were really looking for, but it was the one that we hated the least.

"And what we loved about it was that it was not obvious from the name what this band would sound like or be about.

"It felt fresh in that sense.”

He added: "It was the one we chose and we didn't really love it at first."

"Paul McGuinness, our first manager did say 'look, it's a great name, it's going to look good on a T-shirt, a letter and a number'."