Miley Cyrus Hits Back at Criticism of Low Singing Voice 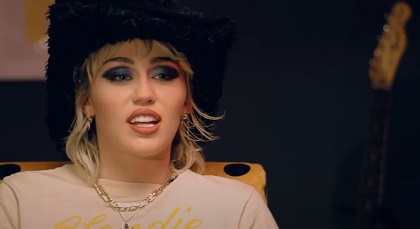 Miley Cyrus has recently spoken out against criticism regarding her lower singing voice.

In a recent interview alongside Metallica drummer Lars Ulrich for Interview Magazine, the singer said that her cover of the band’s ‘Nothing Else Matters’ - which she recorded for the tribute album ‘The Metallica Blacklist’ - made her feel liberated and free.

"This song means something to me on the deepest level,” Cyrus reported. She went on to say that the song allowed her to explore her lower register after years of critics suggesting that her low singing voice left her “sounding like a man.”

"I even went down to some of those octaves, because singing those super-low lead vocals is so satisfying," Cyrus recalled. "My whole life, whether in vocal training or just continuing to hone my craft, it's always been about, 'Why do you sound like a man? Where's your f**king falsetto, b**ch? Why can't you sing the high octave of Party in the USA anymore?'"

According the Cyrus singing in her lower tones helps her to achieve a more “authentic” and “genuine” sound.

"My voice is how I represent myself," she continued. "It's how I express myself. I've worked with so many people who tell me, 'We're going to have to bring in a singer to hit those high parts.' You know, 'falsetto' is this Latin term for when a boy goes through puberty, but they still want him to sing in the choir. It means 'false.'"

Regardless, the singer insisted that she always sings from the heart of the moment, no matter what register she’s singing in.

"I say what I mean in the moment, even if that changes tomorrow. I was honoured by the fact that I didn't have to sing this song in the way that females are 'supposed' to sing. You can hear that at the end of the song, when I take the gloves off and just start flying. That part of the song really grabs people," she added.